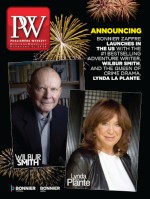 Last September, Puerto Rico was hit by two powerful hurricanes, Irma and Maria, that caused widespread devastation. Many parts of the island were without electricity for months, and some still have no power. Residents have struggled to find basic necessities since the storms, but book sales, by and large, have proved to be surprisingly resilient.

According to John Orcutt, CEO of JR Blue Label Management (the largest book distributor in the Caribbean, with more than 300 points of sale, including bookstores, big-box outlets, pharmacies, hospitals, airports, and supermarkets across Puerto Rico, where the company is based), Puerto Ricans have been reading more books since the storms hit. Since the internet and electricity weren’t available, he explains, sales at the outlets JR Blue services on the island have been a lot higher than they were in the same period last year.

JR Blue COO Juan Peña says he started noticing a big demand for books within two weeks after Maria hit, when JR Blue–owned the Bookmark and the Bookmark Boutique opened up again, in Guaynabo and Carolina, respectively. “We did everything we possibly could to service these stores,” he notes. “The demand was extremely challenging and exciting at the same time.” Peña notes that since gasoline was in short supply, JR Blue’s staff had to make deliveries to stores using their own cars.

“Normally we would expect sales [at Bookmark] down in October, compared to a summer month like August, by about 5%–10%,” Orcutt says. “Instead, we saw an increase of 63% in October 2017 [over the summer months], even though we were only able to open [the Bookmark in] mid-October.” He adds that October sales at the Bookmark were up 57% from October 2016, and that November 2017 sales were 160% higher than the previous November.

Orcutt says the biggest challenge JR Blue has had during the past few months is with freight forwarders and shippers. With FEMA and some of the big-box stores monopolizing the freight companies, getting more books into the island to meet demand has been very difficult.

“Obviously, we missed sales opportunities,” Orcutt acknowledges. “In spite of that, what we did have in the warehouse and what we were able to source through air freight sold extremely well.”

Located in a major shopping center in San Juan, Casa Norberto is one of Puerto Rico’s biggest bookstores. Shortly after it opened last spring, Puerto Rico declared bankruptcy, and in the fall, the two hurricanes hit. “The store is succeeding despite the hurricanes,” says owner Norberto González. “Puerto Rico didn’t have electricity, people didn’t have internet or television, and so they started to read books.”

González says his stores—he owns others in Rio Piedras, Cayey, and Universidad del Sagrado Corazon, all named Librería Norberto González—sold many books, mainly in Spanish and in different genres, and that Casa Norberto sold the most. González was able to reopen Casa Norberto three days after Maria struck and aired radio ads to let the public know. Sales started to climb a few days later.

González says his bookstores were doing well before the hurricanes, including Casa Norberto, which continues to see sales growth, largely due to its prime location. (He is also a book distributor and publishes local Puerto Rican authors.)

Javier Ortiz, owner of the bookstore Librería Laberinto, which has locations in Old San Juan and Rio Piedras, has had a more mixed experience since the hurricanes. He has so far been unable to reopen the Rio Piedras store. “We were able to organize and set up a good sale during the holiday season” at the San Juan location, Ortiz adds.

Given the challenges, Ortiz says he has been satisfied with sales, even though they dropped 50% from September to January, compared to the same months in 2016. “People went out and shopped,” he notes. “This is all a good sign. I think those bookstores that can overcome this difficult period will be around for a very long time.”

Orcutt also remains hopeful: “The good news is the market seems to be intact and doing well, and that is encouraging. How that looks going forward is a question.” JR Blue offices got electricity back in early January.

A version of this article appeared in the 02/05/2018 issue of Publishers Weekly under the headline: Book Sales Weather the Storms in Puerto Rico
TOC
ADVERTISEMENT
More from pw