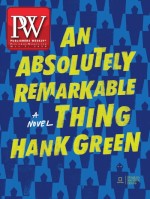 In her first U.S. published novel, Our Kind of Cruelty, Araminta Hall considers the differences between men and women

British writer Araminta Hall’s propulsive psychological thriller Our Kind of Cruelty (FSG, May), in which a private sex game has deadly consequences, is her third novel but her first to be published in the U.S. When she came up with the idea for Our Kind, Hall thought about switching back and forth between the accounts of the young lovers: Mike Hayes, an intense London striver who overcomes a difficult upbringing to achieve success in the finance world, and Verity, his ex-girlfriend, a well-bred beauty with a burgeoning career in artificial intelligence.

But something compelled Hall to stick to Mike’s side of the story. “Switching perspectives almost would have been the easy thing to do,” she says. “And then I just thought, what I’m writing about is how society judges women, and we still live in a very male society.”

Hall expects not hearing Verity’s side will frustrate readers, but, she says, “we very rarely hear the woman’s side.” It’s a canny choice to stay with Mike’s point of view, flipping the script on the crazy-woman thrillers that dominate the genre.

The effect is powerful, and Hall’s mastery of Mike’s mix of love and obsession makes the book hard to put down. He wants to be so close to her that he dreams of wrapping the “pulpy mixture protecting the gray mass of twisted ropes that form her brain” around himself so “she would only dream of me.”

But delving deep inside the head of this deliciously deluded young man elicits a groundswell of frustration with Verity, who seems to have moved on from her relationship with Mike; she’s engaged to marry another man, Angus Metcalf. In Mike’s version of events, Verity is merely testing his devotion to her. He believes her actions to be a continuation of a game they played called the Crave, in which they entered a bar separately and waited until a man hit on Verity. Then, when she gave a sign, Mike approached and intimidated the suitor. The game ended with passionate sex between Verity and Mike, often in the bar’s bathroom.

One of the tensest scenes in the book occurs when Mike arrives at Verity’s door when Angus isn’t there. He pushes his way in, certain that she loves and wants him. She manages to deflect his advances and convince him to leave, but her choice not to report the incident is later questioned.

With the book coming to market in the U.S. in the era of #MeToo and Time’s Up, there’s a heightened understanding of how women can feel pressured to keep silent about the sexual abuse they’ve suffered. “It’s really hard, if you are not a woman, to understand how it feels to be physically weaker than someone who is going to maybe harm you, maybe not,” Hall says. “That permeates every aspect of our relationships with men.”

Though the novel’s quasi–assault scene is at the frightening end of the spectrum of how two people can have vastly different interpretations of the same event, Hall points out that men misinterpreting women’s wants happens often. “Most women, thank God, haven’t actually been raped, but pretty much all women have been intimidated in some way.”

Hall’s first inspiration was the Amanda Knox case. “I remember at the time thinking, she’s a 21-year-old woman having sex with her boyfriend,” she says. “It really couldn’t be less shocking, but the newspapers made it all about her and her sexuality. You know her boyfriend was doing exactly the same things as she was, but he’s always just faded into the background.”

Hall knows that Verity is a character who resists easy characterization. “Women can be strange and sexually active and all those things, but it doesn’t make them ‘bad.’ ”

Hall says she was also inspired by the 2016 U.S. presidential election. “It really spurred me on because Hillary was judged so harshly, while Trump was caught on tape literally bragging about sexual assault,” she says. “It’s that disparity between how women are expected to behave and be perfect, and men can be so much less than perfect.”

And Mike is far from perfect. “It was terrifying how easily his voice came to me,” Hall says. It was also the first time she had written in the first person. “It made me feel quite weird at times. It felt like sitting down with a friend when I was writing Mike’s character. I knew how he would react to every situation.”

Hall also knew the kind of story she wanted to tell: not quite crime, not literary fiction, but not strictly commercial fiction either. “I used to think that there was no real place for the books I want to write,” she says. “I’ve always loved books where everything happens within people’s minds and the thrills are within the mind.” Patricia Highsmith and Iris Murdoch are favorites of hers; the epigraph for Our Kind of Cruelty is, “Of course this is a love story,” from Murdoch’s The Sea, the Sea.

When a friend gave Hall a copy of Gillian Flynn’s Gone Girl, she read it in two nights—“like everyone,” Hall says, calling it a “seminal book.” She felt a kinship with the book’s kind of storytelling, and it gave her hope that such books could be published and succeed. So it came as a shock when she was visiting New York in October and received an email from Daphne Durham, her editor at Farrar, Straus and Giroux, saying that Flynn was going to blurb the book. Of course, Durham hadn’t told Hall that she’d sent Flynn a galley. Hall admits that Flynn’s quote “was probably one of the better moments of the whole process.” (The blurb is a doozy, describing Our Kind as “one of the nastiest and most disturbing thrillers I’ve read in years.”)

Bringing the book to an American readership has been enjoyable, Hall notes; FSG has been “massively involved” and it’s “been fantastic” to see how well her U.K. and U.S. editors have worked together. She says she loves the fact that the American take is so political.

For Hall’s next novel, which has started to materialize after a year of starting and abandoning several ideas, she is returning to the relationship between men and women. “A few months ago, a story came to me about how men see women, how we don’t necessarily fit into neat boxes, and how both sexes have got to learn a new way of negotiating with each other,” she says. “But more important than any theme is that it must be a thrilling story.”

Hall says she tells her creative writing students at New Writing South (a nonprofit organization in Brighton, England, where she lives): “Whatever genre you are in, I hope that you are all writing psychological thrillers. Without psychology or thrills, it’s going to be a bit boring.” She adds, “They often come around to my thinking.”

Deborah Bander is a lawyer and freelance writer living in Brooklyn.

A version of this article appeared in the 05/07/2018 issue of Publishers Weekly under the headline: He Says, She Says
TOC
ADVERTISEMENT
More from pw