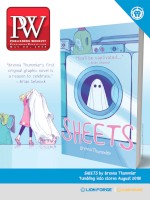 Soft adult fiction sales led to a 1% decline in total unit sales of print books in the week ended May 20, 2018, compared to the similar week in 2017, at outlets that report to NPD BookScan. Print unit sales in the adult fiction segment dropped 9% from those of the week ended May 21, 2017. It was the second consecutive week that the segment saw a decline, and once again the change was not due to a huge fiction hit in 2017 (the #1 title for the week ended May 21, 2017, was Night School by Lee Child, which sold more than 34,000 copies) but was the result of overall softness among the top 100 bestsellers; total units in that group fell 22% in 2018 compared to 2017. The Cast by Danielle Steel was the top adult fiction title in the week ended May 20, 2018, selling more than 26,000 copies. The juvenile nonfiction segment had the strongest gain, with units up 6%. The segment was given a boost by a large number of summer activity books moving up the bestseller list, as schools begin to close for the summer. Five titles in the Summer Bridge Activities series were on the top 10 juvenile nonfiction bestseller list, selling a total of about 20,000 copies. With Magnolia Table by Joanna Gaines once again dominating the adult nonfiction category (as well as being the #1 overall seller in the week), print unit sales in the segment rose 2%. Magnolia Table sold more than 69,000 copies in the week. Unit sales slipped by less than 1% in the juvenile fiction category despite a solid first week for War Storm by Victoria Aveyard, which sold more than 28,000 copies, putting it in second place on the category bestseller list.

A version of this article appeared in the 05/28/2018 issue of Publishers Weekly under the headline: More Weakness in Adult Fiction in Mid-May
TOC
ADVERTISEMENT
More from pw