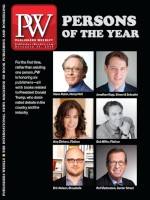 Darius the Great Is Not Okay (Dial) is Adib Khorram’s first published novel—and a finalist for the William C. Morris Award, given to debut novelists. But, like many other writers, Khorram did not find success with the very first novel he wrote.

“Depending on how you count, I have four or five in the drawer,” says Khorram, a Kansas City, Mo., native and resident. “Some were really bad. Some were decent but the time wasn’t right. But I’m proud of all of them because they got me to Darius.”

Despite the false starts, Khorram’s writing career has had a long gestation. He began writing seriously in sixth grade, after he showed his English teacher 10 pages of fan fiction—a sequel to The Lord of the Rings—which she damned with faint praise. “She didn’t discourage me, but she urged me to write something original next,” he recalls.

Khorram took the advice to heart. His school was upgrading its technology and had stored its old word processors in an empty classroom. He and some friends got permission to use them. “We had an after-school club where we would go to that classroom and write,” he says. “Fantasy, sci-fi, some sort of adventure—that’s where it started.”

Writing was a refuge for Khorram, who felt “other” both in his Kansas City neighborhood—he and his sister were the only Iranian-Americans—and at family reunions, because everyone else could converse in Farsi.

At Southern Illinois University, Khorram studied technical theater. (He still works as a projectionist and lighting designer at a production company but was able to reduce his hours after selling Darius and keep his health insurance.) The urge to create remained, however. Seeing Peter Jackson’s Lord of the Rings trilogy led him to enroll at the Vancouver Film School.

“I was convinced I wanted to be a filmmaker until I studied film,” Khorram says. “Then I tried to write screenplays, but it is impossible to sell one, so the very first novel I wrote was an adaptation of the first screenplay I wrote. It didn’t sell either, but I will never forget how fulfilling it was to finish a novel.”

That was 2010. Over the next half a dozen years, Khorram educated himself—studying the novel-writing process, finding critique partners online, learning the ins and outs of getting an agent.

And Khorram wrote. He participated in NaNoWriMo, including in 2014, when he started a novel he felt was “the one” that would finally sell. “It felt different and fresh, unique,” he recalls. “I remember I finished the first draft on a Monday. The next day, I read the deals report in PW, and one of the deals sounded exactly like the novel I had just finished.”

Nevertheless, Khorram persisted. Visiting his father’s extended family for Nowruz, the Persian New Year, he began to consider a novel based on his own experience as an Iranian-American adolescent in the Midwest. He gave his main character, Darius, an Iranian mother (his own is American) and an American father (Khorram’s father was born in Yadz, the village in Iran where most of Darius is set). Khorram also gave Darius chronic depression—something the author has lived with most of his life.

Khorram showed an early draft to an agent at a writers conference who “asked a few insightful questions that blew the story wide open,” he recalls. He also discussed it with his relatives when they met for a reunion in Cypress. “Everyone had suggestions as to what I should add.”

After revising, Khorram was just about to participate in #DVPit, a Twitter event created to showcase pitches from marginalized voices, when an agent he had queried asked to see his book. While withdrawing it from the other agents he had queried, he got two more requests for the manuscript. He wound up signing with Molly O’Neill, who grew up in Texas.

“Molly and I clicked,” Khorram says. “We shared a Midwestern cultural experience.” He revised again. “I am terrible at pacing. Molly had excellent advice on how to better shape the story.”

The book sold to Dana Chidiac at Dial just a few weeks after going out on submission. Khorram says that after all the years and hard work, the best part of becoming published was getting to work with someone who could help him make his writing shine. “It’s kind of selfish, but working with Dana has been my favorite part of all this,” he says. “She’s gotten work out of me that I didn’t know I was capable of. Darius would not be the book it is without her.”

Readers have responded, telling Khorram they appreciated the inclusion of a character living with depression. He’s also received positive feedback from those who, like him, are “diaspora children, a generation trapped between two cultures,” he says, and identify with his main character, who is “not getting the social cues entirely right in either one.”

But mostly, Khorram says, people comment about his mouthwatering descriptions of the food Darius is offered when he goes to Iran for the first time to visit an ailing grandfather he has never met before. “I have had so many people tell me that the book made them really, really hungry,” he says.

A version of this article appeared in the 12/24/2018 issue of Publishers Weekly under the headline: Adib Khorram
TOC
ADVERTISEMENT
More from pw