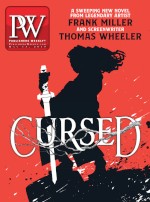 Watching the Stars: Spotlight on Dan Haring and MarcyKate Connolly

When artist, writer, and animator Dan Haring first conceived of a story about shepherds who watch over the stars, he imagined it would take the form of an animated short film; Haring has worked on blockbuster movies such as Disney's Tangled and Sony's Hotel Transylvania. But his agent, Kathleen Ortiz, suggested that the idea would soar as a middle grade novel.

The Star Shepherd is the story of 11-year-old Kyro, a star shepherd. He must watch over his ancestors, who gave their hearts to the sky in the form of stars to protect people from the dark creatures that once filled the black dome over the Earth. But the stars start falling and disappearing, so Kyro's father leaves to report the threat. When he doesn't return, Kyro and his friend Andra go on a quest to save the falling stars.

Although Haring created a detailed synopsis of Kyro's story, the project presented some challenges; he had to come up with a mythology and a history to support the book's world. Haring asked himself, "Why do the stars hang in the sky? Why do they fall? What happens if they don't get rescued? Who are these people who rescue them?"

These questions are what drew author MarcyKate Connolly to the project. She is obsessed with stars, so when her agent pitched the concept along with Haring's illustrations, she was instantly hooked. "Dan's illustrations are incredible," Connolly says, "and I fell in love with the characters and the plot immediately. He'd crafted such a wonderfully weird story world, and that was right up my alley."

Connolly is known for creating fantastic worlds and characters in books such as Comet Rising, Monstrous, and Shadow Weaver, so the two creators were a good match. Connolly worked with Haring to connect the elements of the universe he had dreamed up and turn them into a narrative. They met in person to pore over Haring's synopsis, and then the two collaborated mostly via email.

"Honestly, I was a little apprehensive, since I'd lived with this story for a long time," Haring says. "But MarcyKate was incredible to work with. She's a fantastic writer, and she really connected with the story and characters in a way that quickly put my fears to rest. We more or less stuck with the original synopsis as far as the story line went, but MarcyKate added a ton of cool details and ideas that made it so much better."

The book's many legends conjure bedtime stories and campfire tales, including the Legend of the Seven Elders. "The elders sacrificing themselves to create the stars wasn't inspired by any particular legend, though there may be some that are similar," Haring says. "It had more to do with imagining a world without any sort of stars or lights in the night sky and what lengths people might go to to protect their world."

Haring and Connolly have created an incredible adventure in the style of the hero's journey. The Star Shepherd is set in a Tim Burton–inspired fantasy world that will leave readers eager to explore this universe further.

Sponsored by Sourcebooks
A version of this article appeared in the 05/13/2019 issue of Publishers Weekly under the headline: Watching the Stars: Spotlight on Dan Haring and MarcyKate Connolly
TOC
ADVERTISEMENT
More from pw