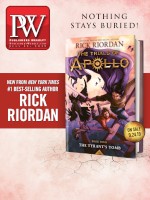 Since she took over as president of Chronicle Books in January 2017, Tyrrell Mahoney has expanded the San Francisco–based publisher, best known for its illustrated works, into new subjects areas and new locations. Sometimes they go hand in hand, such as when, in May, the company created Chronicle Chroma and appointed Steve Crist and Gloria Fowler, who were publishers of Ammo Books, to lead the unit, which will be based in Los Angeles.

“I think it is important that we have a Los Angeles presence,” Mahoney said. In her eye, Crist and Fowler will develop titles that have a California aesthetic while bringing their own vision to Chronicle.

Also in May, Chronicle jumped into the hot audiobook market, announcing the formation of a new Chronicle Audio division. The unit, created in partnership with its distributor, Hachette (specifically Hachette Audio), released its first four audiobooks this spring, with the goal of publishing 10–15 adult nonfiction titles per season. The audio group is being overseen by Mark Tauber, former head of HarperOne, who joined Chronicle last September with a mandate to publish six to eight titles per season, with a focus on narrative, practical, and inspirational nonfiction.

Tauber’s imprint, Chronicle Prism, will publish its first books this fall and has already moved up the pub date for one of its inaugural titles, Scarred: The True Story of How I Escaped Nxivm, the Cult That Bound My Life by Sarah Edmondson. The book describes her time in the cult, whose leader, Keith Raniere, was found guilty of racketeering and sex trafficking. Mahoney said that the launch of Prism, and the types of books it will publish, is a prime example of how Chronicle is looking to broaden the type of content it offers.

One goal of that expansion is to find new sales outlets. Physical retailers have always been critical to Chronicle’s success, Mahoney said, since it is in physical stores that customers can fully experience the design and production work of its titles. She added that Chronicle has had tremendous success in specialty stores and that she hopes its broader list will expand its penetration in traditional bookstores.

copies in print. Mahoney noted that Chronicle was able to turn around the Bundo book so quickly because it has an ongoing relationship with HBO, which broadcasts Last Week Tonight. Chronicle has, for instance, published a number of Game of Thrones items and will publish a $50 Game of Thrones illustrated title in November.

The nonbook segment has always been important for Chronicle, and it continues to be. Mahoney said that the company is always looking for ways to package popular material into puzzles and calendars, for instance. Lego announced a new partnership with Chronicle last December, under which the publisher will produce titles inspired by Lego’s toys. The first seven Lego works will appear in spring 2020 and will include gift books, puzzles, postcards, journals, and erasers. Of the 300 titles Chronicle publishes annually, about 125 are in nonbook formats.

Distribution has been another growing area. Chronicle just signed Arthur Levine’s new company, Levine Querido, as a client; it will start distributing titles from the publisher in fall 2020. Since 2010, Chronicle has teamed with Abrams in the London-based distributor Abrams & Chronicle Books, and Mahoney said that though Brexit has made things “complicated” for the unit (last week, Inez Munsch was named to succeed Brenda Marsh as A&CB MD), she still views international growth as a major opportunity.

Chronicle now has a staff of about 210 and has been expanding its presence in New York City. Currently, Chronicle’s New York staff numbers seven, including three editors; Mahoney wants to get the overall number to 10 by 2020.

Chronicle’s growing diversity can be seen in its top titles of 2019 so far: I Wish You More by Amy Krause Rosenthal; From Crook to Cook by Snoop Dogg; Tiny T. Rex and the Impossible Hug by Jonathan Stutzman; Ruffage: A Practical Guide to Vegetables by Abra Berens; and The Art of Toy Story 4. “Our growth and reach are reflective of the dynamics in the marketplace and how we fit into the market,” Mahoney said.

A version of this article appeared in the 07/22/2019 issue of Publishers Weekly under the headline: Mahoney Sets a Broader Course for Chronicle
TOC
ADVERTISEMENT
More from pw