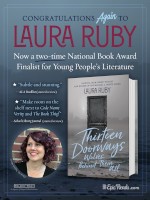 What’s Beautiful About the Essay: PW Talks with Jordan Kisner

In the book, you explore the theme of how people make distinctions, in various areas, between inside and outside. How do you see these distinctions playing out?

I was noticing a kind of divisiveness and insistence on strict binary categories in how we talk about faith, politics, gender, illness, and life and death, and I wanted to explore how I thought about that. Now that I’m on the other side of the book, I still see that, of course; we still live in a world that’s very interested in dividing people and experiences into categories. The problem I was attempting to solve for myself—how I deal with those binaries in my own life—has largely been solved, at least for now. It hasn’t radically changed the way I see the world—it’s more that I feel more clarity about my disposition towards that [tendency to think in binaries].

How did you balance the journalistic and the essayistic?

I didn’t go in with any clear vision or set of rules for myself—it was totally intuitive. One of the things I like about the essay as a form is it’s so capacious. It became a question, for each essay, of what was going to be required to express the idea or answer the question. It’s trial and error and a lot of putting things in and taking them back out. What’s beautiful about the essay is you can resist the impulse to make the categories clean. You can make it muddy and fluid.

What was the easiest essay to write?

The Shaker essay [about that religious community’s history], in part because it’s brief—it’s like a little idea. So it was much more contained in scope for what it was trying to do. I loved everything about the research for it and the gesture of the essay itself felt joyful and straightforward. It just felt very clean, like it almost came out in one breath, which never happens to me. That was a really beautiful, fun way to write. It’s so rarely how I write.

What was the hardest essay to write?

I wrote the first essay, “Attunement” [about evangelical Christianity], I have to think upwards of 50 times. It took me years and years and years. It’s the earliest material in the book. I had to write it over and over and over again. I couldn’t figure out how to make it cohere; I couldn’t figure out what belonged in it and what needed to be left out. What happened was I eventually realized I needed to write a book. Several essays started as threads in “Attunement.” Then I just realized I couldn’t do it—this wasn’t an essay, this was a book, this was the opening salvo that contains the feeling of the book and opens you into the book but doesn’t try to do too much and isn’t too weird and all over the place.

A version of this article appeared in the 10/21/2019 issue of Publishers Weekly under the headline: What’s Beautiful About the Essay
TOC
ADVERTISEMENT
More from pw