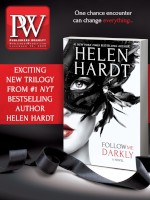 Translations Pay Off for Amazon

Amazon Crossing, Amazon’s publishing imprint focused on literary translation, was first announced in May 2010 and published its first book, The King of Kahel by Guinean author Tierno Monenembo, that November. Since the release of that first title, the imprint has published more than 400 books, from 42 countries and in 26 languages, and become the most prolific publisher of translated literature in the U.S.

Crossing has also produced some of the bestselling titles to emerge from Amazon’s publishing platform, including The Hangman’s Daughter by Oliver Pötzsch, which has reached more than 800,000 readers according to the company, and Petra Durst-Benning’s The Glassblower, which has reached 329,000 readers—both translated from German. (Amazon opts to quantify the success of its books in terms of “reaching readers,” which encompasses sales for the book across print, digital, and audio, and downloads from Kindle Unlimited.) Among the imprint’s other popular fiction writers is Marc Levy, whose P.S. from Paris reached 95,000 readers; Levy, arguably the bestselling author in France today, has published four books with Crossing, with the fifth being A Woman Like Her, in May 2020.

Since its launch, Crossing has focused primarily on fiction; a few early efforts at nonfiction failed, but it has slowly returned to the category, and with promising results. In early 2018, Crossing published A River in Darkness by Masaji Ishikawa, the story of a man’s escape from North Korea, translated from Japanese. Surprisingly, the title landed on the New York Times bestseller list for audiobooks and has become the imprint’s third-most-popular title, reaching 131,000 readers.

Crossing editorial director Gabriella Page-Fort credits the success of the book to its direct tone, noting that the original title translates to The Hell with This! “It’s not a happily-ever-after story, where he makes it to America and is living out the American dream” she said. “At the time of writing it, he was confident his family in North Korea were probably dead. When I acquired the book, it was with an enormous amount of trepidation, but the results have really pleased me.”

The next nonfiction book published by Crossing was more conventionally palatable: An American Princess by Annejet van der Zijl, the story of a 19th-century American adventurer who remade herself into European royalty, originally published in the Netherlands. It became a Wall Street Journal bestseller and has reached 113,000 readers.

Switching into acquiring and publishing nonfiction brought new challenges. For starters, Crossing had to fact-check the books, which wasn’t necessary with fiction. “When the sources for a book are only in Korea or North Korea, like they were for River in Darkness, that can pose unique editorial demands,” Page-Fort said. Also, media reach and publicity is different for nonfiction vs. fiction.

The biggest challenge facing Crossing may be finding more titles to publish in nonfiction. Though there is a vast catalogue of untranslated work, much of it is too culturally specific to be of much interest to international readers. And, Page-Fort said, the existing publishing infrastructure doesn’t facilitate publishing translated nonfiction. “Foreign publishers are often pushing books that are representative of their culture—export products,” Page-Fort said. “And that’s not exactly what we’re looking for. We’re trying to find books that are relatable.”

Sometimes, though, there are more obvious choices, such as Crossing’s most recent nonfiction title, released in October. The Man Who Played with Fire by Jan Stocklassa tells the true story of the investigation that Swedish journalist and novelist Stieg Larsson was involved in that inspired his bestselling Millennium novels.

One of Crossing’s strategies for finding books is to solicit suggestions through an online submission portal that is open to publishers and translators, which Page-Fort said has been a success. One example of a book the imprint was unlikely to find otherwise is the novel In Love and War by Roma author Veijo Baltzar, who lives in Finland, which Crossing discovered via a portal submission and will publish in the fall of next year.

Another strategy Crossing has employed is to take strong, visible positions at international book fairs—particularly the London Book Fair, where the imprint sponsors the translation center, and the Frankfurt Book Fair, where it hosts a stand in the highly trafficked German-language hall. At Frankfurt this year, Page-Fort scoured the fair for titles with help from the rest of her editorial team: senior editor Liza Darnton, formerly of Penguin Press, and Elizabeth DeNoma, an ex-academic and specialist in Scandinavian languages.

DeNoma was instrumental in developing the next nonfiction title coming from Crossing—a memoir by Swedish-American hip-hop artist Jason Diatiké, who performs under the name Timbuktu. The book will publish in March 2020.

“We’re always looking for books by people whom we’ve never met before, from places where we’ve never been,” Page-Fort said. “So, how do you do that? That is what we, as publishers, are always striving to answer.”

Asked whether she has ever had to propose ideas for Crossing to management in one of the six-page memos that Jeff Bezos is rumored to demand for all new projects, Page-Fort confirmed she has. “I have had the blessing with my career at Amazon Crossing of having tons of my ideas—whether they be good, bad, or ugly—come to life, and those six-page memos that we write in order to bring ideas to fruition actually get things done,” she said. “I think that sometimes people criticize Amazon for oversimplification, but in publishing you can’t simplify that much, so the memos really work in this instance. And any method that results in decisions being made that support my books and my authors and drive more diversity for the list I’m publishing—I’m really into and excited about. It feels like a great use of my time!”

This article has been updated to correct spelling and factual errors.

A version of this article appeared in the 11/11/2019 issue of Publishers Weekly under the headline: Translations Pay Off for Amazon
TOC
ADVERTISEMENT
More from pw