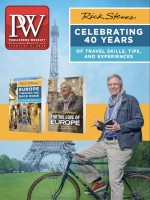 Guidebooks have mastered the where and when of what’s happening around the world, says Tomaso Biancardi, an editor at Italian publisher Iperborea, but not necessarily the why. As “passionate travelers,” he says, he and his colleagues are interested in seeing the sights, but also in the political and social contexts surrounding them.

With that impulse in mind, Iperborea launched the Passenger series in 2018. Each volume focuses on a single city or country, compiling essays and long-form narratives, photojournalism, book and film recommendations, a suggested playlist, and more. “The stories explain what we cannot see as tourists,” Biancardi says.

In May, Europa Editions is bringing the Passenger’s first English translations to the U.S. “These pieces are taking a deep dive into what’s going on culturally and socially,” says Europa editor-in-chief Michael Reynolds of the various contributions to the series. “These are lived experiences.”

Each book features a single cover image, framed in a way meant to evoke a passenger’s view from a train. “At first it was a plane, but we chose a train because of the environmental footprint,” Biancardi says, echoing a growing consciousness among publishers. (See “Change in Climate.”)

Here, we look at forthcoming titles that focus as much on the inner journey as the physical destination. Braver Than You Think

Grief stricken by the death of her mother, Downs quits her job as a newspaper journalist and embarks on the travels the pair had once imagined while poring over issues of National Geographic. As she touches down in a Cairo on the cusp of a revolution or suffers from asthma in Cusco’s thin air, she remembers her mother’s words: “You are braver than you think.” Travel isn’t about distance, Palestinian peace activist Abu Sarah writes. It’s about self-transformation, which, he says, can occur just by crossing into a different neighborhood. Drawing on his experiences leading cross-cultural exchanges in conflict zones around the world, Abu Sarah explores how travel can serve as a tool for positive change. For the Love of Europe

Steves collects 100 of his favorite stories published over the course of his career. Harking back to when he was a lone backpacker scribbling in his journal rather than a guidebook author, he leaves out the logistics and instead shares the memories he’s accrued. A night of fado in a tiny Lisbon bar leaves him feeling “oddly uplifted,” though the songs are studded with sadness. In a newly independent Montenegro, a 200-year-old embroidery hanging in the sacristy of a church—woven over two decades from silk and the weaver’s hair—prompts Steves to question the durability of his own life’s work. German journalist Orth, whose previous books chronicled treks through Iran and Russia, here offers an account of couch surfing across China. Spanning the physical and psychic distances between Macau’s casinos and the country’s far northwestern fringes, Orth hopes to glean how China’s rise will influence the rest of the world by understanding how its citizens make sense of the change all around them. In 2016, on the occasion of the National Park Service’s 100th anniversary, CBS Sunday Morning correspondent Knighton sets off on a yearlong quest to visit every national park from Acadia to Zion. Crisscrossing America amid an increasingly polarized and divisive election year, Knighton reflects on how public lands can serve as common ground. The Meaning of Travel

“The philosophy of travel isn’t a thing, but it should be,” writes Durham University professor Thomas. While traveling solo in wintry Alaska, a taxidermied musk ox prompts Thomas to contemplate Francis Bacon, who expanded intellectual horizons as explorers pushed the limits of the known world. A search for backcountry maps launches Thomas into a meditation on what’s actually being mapped. “Travel,” she writes, “is tangled with philosophy.” Dueck travels 28,000 miles from his Mennonite hometown in Manitoba to Argentina on a motorcycle to meet the communities that left Canada in the last century and pushed south seeking greater isolation. As Dueck, a former financial journalist, makes his way through the Americas, he considers the changing landscape and what ties, if any, he shares with the communities he meets. Europa Editions and Iperborea, May

Highlights of volumes one and two, which focus on Japan and Greece, include works of nonfiction by notable authors from those countries. Novelist and essayist Banana Yoshimoto reflects on a changing Japan as she says goodbye to her old home in Tokyo’s Shimokitazawa district and moves one station up the rail line to a home she suspects will be her last. In “The Lost Generation,” short story writer Christos Ikonòmou looks at the lingering effects of Greece’s economic crisis. Try to Get Lost

Frank, best known for her fiction, looks back on a lifetime of travel to question whether such experiences really lead to instant wisdom, and examines what people carry along in their luggage, and why. The “16 scintillating essays,” PW’s review said, “map psychological interiors as much as they do geographic landscapes.”

A version of this article appeared in the 02/03/2020 issue of Publishers Weekly under the headline: Psychic Explorations
TOC
ADVERTISEMENT
More from pw