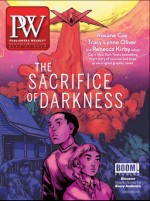 When Covid-19 concerns forced the postponement of the 2020 Summer Olympics, Atria had to rethink plans for the June release Head over Heels, which ties into the Tokyo Games. The publisher is sticking with the original date but positioning the rom-com as escapist rather than timely. “We’re really leaning into this,” says Atria editor Kaitlin Olson. “This is a book to lift people’s spirits, to let them fall into a world in which coronavirus doesn’t exist.”

Bold Strokes, too, has an Olympics-themed romance, All the Paths to You. Editorial and marketing consultant Ruth Sternglantz says the book’s setting is being billed as “fanciful, rather than mirroring real life. We’re asking readers whether they wish they were watching the Olympics. This book allows that fantasy.”

Other forthcoming books connect to politics, in an election season that already looks different than in years past. Such titles “are about things we’d like to see in an ideal world,” says Cindy Hwang, v-p and editorial director at Berkley. “They’re very much about compromise, and people having different beliefs but still being able to love each other.”

Here, we look at summer romances that offer happily ever after with—or despite—a news hook. All the Paths to You

In this second-chance romance, Quinn, an aspiring Olympic swimmer, runs into her high school girlfriend, Kennedy, just days before Quinn is scheduled to compete in the Tokyo games. All the Paths to You is the adult sequel to 2019’s All the Worlds Between Us, a YA novel that focused on the pair’s teenage relationship. Orenstein follows 2019’s Love at First Like, whose plot hinged on the influence of social media, with a novel set in the high stakes world of competitive gymnastics. Seven years after Avery’s Olympic dreams were dashed, she returns to her hometown and connects with Ryan, a new coach at her old gym. Meanwhile, a ripped-from-the-headlines subplot involves a relationship between Avery’s best friend and former teammate and their emotionally abusive coach. The fifth book set in the world of 2018’s The Wedding Date centers on an ambitious yet cautious lawyer, an impulsive junior senator, and a chocolate cake. Guillory’s latest features an interracial couple (Olivia is black, Max is white) and addresses issues of race, as Olivia navigates not only her relationship with Max, but also intense public scrutiny. The Politics of Love

In Jensen’s debut contemporary,  Rand, a psychotherapist, transgender rights activist, and young widow, meets Shelley, an Evangelical attorney working on behalf of her parents’ faith-based, politically conservative organization. Rand has shunned love since her loss; Shelley is battling depression and anxiety over keeping her sexuality secret. The two slowly discover that despite their first-glance differences, they share core values and a deep attraction.

A version of this article appeared in the 06/01/2020 issue of Publishers Weekly under the headline: The Course of True Love
TOC
ADVERTISEMENT
More from pw