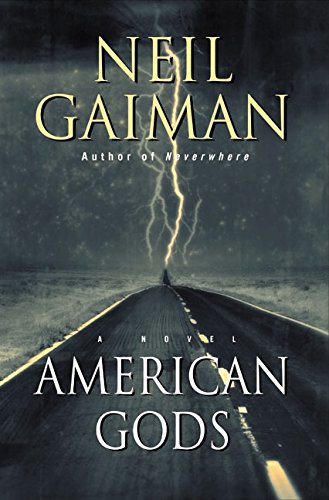 Titans clash, but with more fuss than fury in this fantasy demi-epic from the author of . The intriguing premise of Gaiman's tale is that the gods of European yore, who came to North America with their immigrant believers, are squaring off for a rumble with new indigenous deities: "gods of credit card and freeway, of Internet and telephone, of radio and hospital and television, gods of plastic and of beeper and of neon." They all walk around in mufti, disguised as ordinary people, which causes no end of trouble for 32-year-old protagonist Shadow Moon, who can't turn around without bumping into a minor divinity. Released from prison the day after his beloved wife dies in a car accident, Shadow takes a job as emissary for Mr. Wednesday, avatar of the Norse god Grimnir, unaware that his boss's recruiting trip across the American heartland will subject him to repeat visits from the reanimated corpse of his dead wife and brutal roughing up by the goons of Wednesday's adversary, Mr. World. At last Shadow must reevaluate his own deeply held beliefs in order to determine his crucial role in the final showdown. Gaiman tries to keep the magical and the mundane evenly balanced, but he is clearly more interested in the activities of his human protagonists: Shadow's poignant personal moments and the tale's affectionate slices of smalltown life are much better developed than the aimless plot, which bounces Shadow from one episodic encounter to another in a design only the gods seem to know. Mere mortal readers will enjoy the tale's wit, but puzzle over its strained mythopoeia.