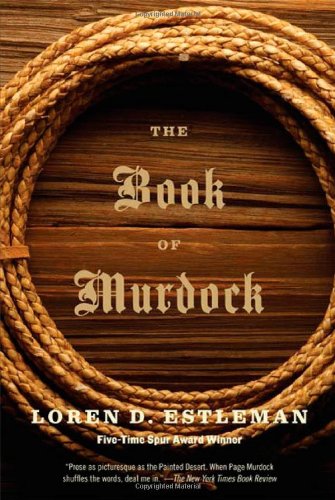 The Book of Murdock

Prolific western and mystery writer Estleman ( ) combines the best of both in his 43rd novel, an exciting western loaded with intrigue, suspense, and clever plot twists. Deputy U.S. Marshal Page Murdock is sent to Texas in 1884 to capture a gang of armed robbers. The wrinkle is that Murdock must go disguised as a traveling preacher, toting a Bible in one hand and a pistol in the other. Murdock gets a less than pious crash course of instruction from a defrocked priest and a wily evangelist, then assumes the role of Brother Bernard Sebastian of the Church of Evangelical Truth. Whiskey-drinking Murdock isn't exactly suited for the clergy, and his cover begins to unravel when he meets a former lady friend, a sheep rancher with a touchy history, and a stone-cold Texas Ranger. A series of ambushes and deaths build to a churchly gun battle where everybody is throwing lead and dropping dead. This is one of Estleman's best, a smart, tightly wrapped story about an honest lawman who drinks Old Forester and knows the difference between a Presbyterian and a Unitarian.