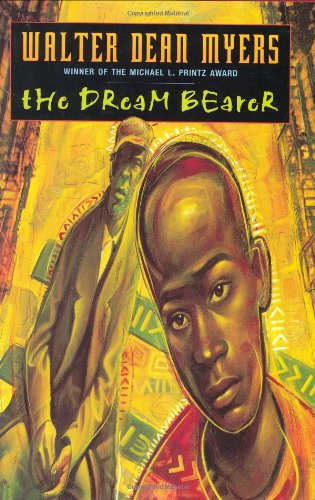 As in Myers's , an older man imparts his experience and wisdom to a bright, receptive youth—in this case, 12-year-old narrator David. The author returns readers to Harlem's 145th Street, where David lives, and the book spills over with the neighborhood's sights, sounds, triumphs and challenges. David's father, whom the boy calls Reuben, has been suffering from mental instability (he was hospitalized for three months and prescribed medication, which he often refuses to take), so when David and his best friend, Loren, meet Mr. Moses Littlejohn in a nearby park, the man assumes the role of male mentor. Mr. Moses tells the boys he's more than 300 years old and that he is a dream bearer ("There are special dreams, dreams that fill up the soul, dreams that can be unfolded like wings and lift you off the ground. Those are the dreams I must bear"). At times the plot strands begin to overwhelm the novel (Reuben's sudden bouts of violence; David's brother's involvement with drugs; his mother's battle with a landlord—who happens to have hired Reuben—over a building she had worked to secure as a homeless shelter). However, the evolving relationships between David and his mother, brother and Loren perceptively reflect the hero's growing insight. And David's budding friendship with Mr. Moses subtly plants a seed of compassion in David for his father, allowing David to step in and be there for both men at crucial junctures. Myers portrays a young man who, warts and all, emerges as a knowable and admirable hero. Ages 10-up.