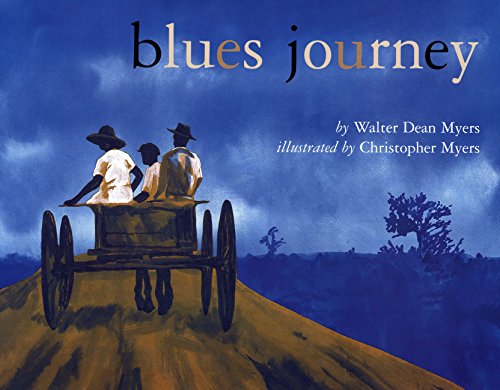 This handsomely designed volume by the father-and-son creators of succeeds as an introduction to the blues genre but lacks a story line to unify the disparate verses. The author begins with a history of the blues, tracing its roots to Africa and describing its metamorphosis in America, as freed captives began to explore lyrics fully and white musicians became influenced by the musical form. He explains that the first two lines represent a call, and the third is the response. In one of the most effective spreads, Walter Dean Myers subtly alters the repetition of the call to chilling effect: "My landlord's cold, cold as a death row shave/ My landlord's so cold, cold as a death row shave/ Charged fifty cents for a washtub, three dollars for my grave." Opposite, Christopher Myers uses blue ink and white paint on brown bags to depict two boys looking out one side of a window, one peering fearfully around the corner, the other holding up his hand, perhaps in protection, perhaps in an attempt to escape. The sides of the window and a collage screen create a sense of imprisonment. But a few juxtapositions are jarring, such as a portrait of a boy reading with a stately, elderly woman appearing over his shoulder, while the verse seems to indicate a romantic sentiment ("I hollered to my woman, she was across the way/ I said I loved her truly, she said,/ 'It got to be that way' "). All ages.