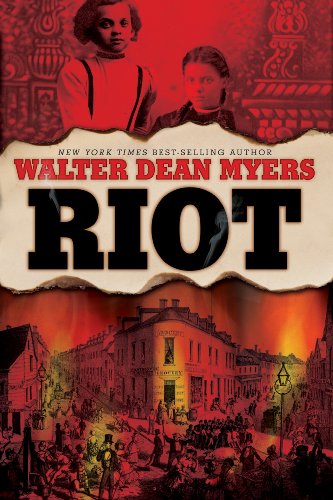 Written in screenplay format like his Printz Award–winning , Myers's historical novel is set in 1863 New York City during the Civil War draft riots, which began as a protest against conscription and resulted in a clash between the city's Irish and African-American populations. The streets are no longer safe for 15-year-old Claire, whose parents (her father is black, her mother Irish) run the Peacock Inn restaurant/tavern. “I don't see why you have to be a black person or a white person,” Claire says, after being cautioned to stay inside. “Why can't you just be a person?” But when the Colored Orphan Asylum is looted and burned, Claire feels an obligation to help. Myers writes poignant dialogue, laying bare the prejudices of the period, while exploring Claire's emotional transition out of childhood. Stage directions (“CLOSE-UP of MAEVE. Her face is a picture of incredible anger as she screams at the POLICE”) pull readers into both the setting and characters, though the transitions between scenes are occasionally jarring. Readers should find this story moving—a direct result of Myers's empathetic portrayal of those on both sides. Ages 12–up.