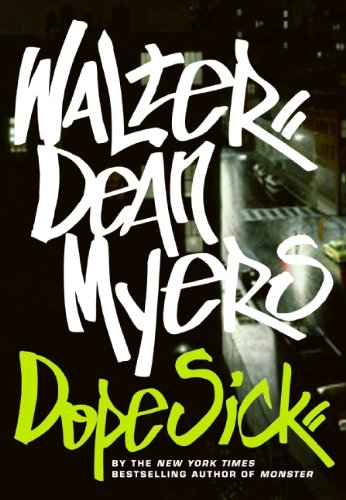 Using both harsh realism and a dose of the fantastic, Myers ( ) introduces an inner-city teen in the jaws of a crisis: 17-year-old Lil J is holed up in an abandoned building, believed to have shot an undercover cop in a drug bust, while police officers assemble in the street below. As he searches for a way out, Lil J is stopped by Kelly, an eerily calm vagrant who invites him to “cop a squat and check yourself out on the tube.” Kelly's TV not only plays scenes from Lil J's life but projects what will happen if he sticks with his current plan: suicide. Shocked, Lil J considers Kelly's question, “If you could take back one thing you did... what would it be?” Aided by Kelly's TV, Lil J revisits pivotal moments and wrestles with his fate. As expected, Myers uses street-style lingo to cover Lil J's sorry history of drug use, jail time, irresponsible fatherhood and his own childhood grief. A didn't-see-that-coming ending wraps up the story on a note of well-earned hope and will leave readers with plenty to think about. Ages 14–up.