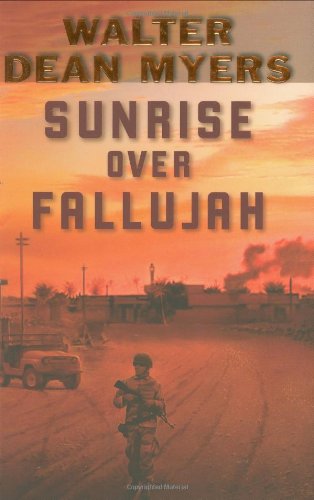 Here it is at last—the novel that will allow American teens to grapple intelligently and thoughtfully with the war in Iraq. Robin Perry, nephew of the soldier central to Myers's Vietnam novel , has joined up because, as he fumblingly writes to his uncle on the eve of the invasion in 2003, “I felt like crap after 9-11 and I wanted to do something, to stand up for my country.” Massing in Kuwait, assigned to a Civil Affairs unit, he finds that his motives continue to elude him as he assesses his fellow soldiers, all of whom seem tougher, braver, better directed. Even as the author exposes Robin's ambivalent feelings and doubts, he re-creates the climate of the earliest days of the war, when victory seems definable and soldiers credibly talk in March or April of being home by Christmas.

Robin serves more as a lens on the war than as a narrator whose voice surprises or compels the reader. His comrades, too, conform to type; rather than individuals, they are representatives of characters familiar to war movies and genre fiction: the soulful musician whose awareness of irony does not stop him from heroism; the medic who defies military protocol in her humanitarianism; the tough-talking gunner—female—who quips her way through danger. In this novel, the conventions are helpful: they ground the reader. For as the Civil Affairs unit moves from a mission of winning “hearts and minds” to having to apologize for the “collateral damage” of having bombed a school and killed children in the “fog of war,” the characters realize they are in the middle of many wars, none of which they understand. Readers will get a sense of the complexities of the war, and of the ways the rank-and-file, as represented by Robin, are slowly drawn into covert or morally dubious engagement. The action builds toward a climax that is affecting despite being easily foreseen. At the end, when Robin writes his uncle one last letter, asking, “[A]re there really enough words to make [kids] understand [about war],” the book itself dares readers to lift that question off the page; it is a forceful bid for their hearts and minds. Ages 12–up.