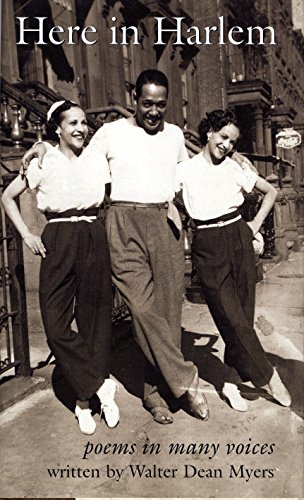 HERE IN HARLEM: Poems in Many Voices

In nearly 60 poems, Myers ( ) treats readers to a tour of Harlem's past and present, its hopes and fears, through the voices of narrators young and old. Together they create a pastiche of the community's fixtures, the church ("Wake up Lazurus! Wake up Paul!/ Wake the congregation and lift their hearts"), the barber shop for men, the hairdresser for women ("My mouth is sealed, you don't even see a crack,/ 'Cause I ain't the kind to talk behind nobody's back"), rent parties (where people gathered to eat, drink and to help the host pay the rent) and Sylvia's restaurant. "Clara Brown's Testimony," parts I-IV provides a continuity through the collected impressions, as she describes her love for Harlem, through heartbreak (when she and her sister do not make the Cotton Club chorus line, she's told it's because her skin is too dark: "That was the day I learned that being black wasn't no simple thing, even in Harlem") and more often joy. Myers offers differing perspectives on milestone events such as Jackie Robinson joining the Dodgers, as well as subjects closer to home, such as young love, or a pairing of poems by a father and his drug-addict daughter. Another especially moving cluster of poems rotates among three WWII vets from the 369th Infantry, known as the "Harlem Hellfighters," one of them blinded by a Southern sheriff after the war, on their way home. And Harlem is indeed home, to all of the people who give voice to its pains and pleasures. Readers will want to visit again and again. Ages 12-up.