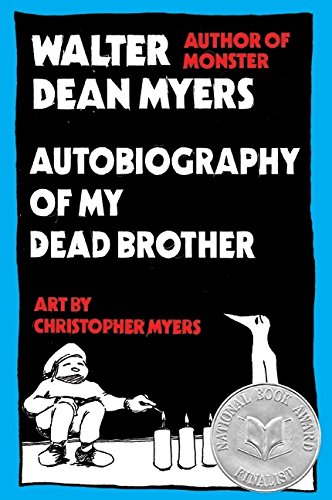 Autobiography of My Dead Brother

Myers mines the themes he explored in his and here, but with less subtlety. Jesse, 15, chronicles the demise of his "blood brother," Rise, in the titular illustrated "autobiography." While readers do not see enough of their early friendship to understand why Jesse continues to care for Rise, what unfolds more credibly is the growing friendship between the narrator and CJ. Like Jesse, CJ joins the benign-seeming Counts, a group going back more than 40 years to the days of "black social clubs." However, another group member has plans other than social get-togethers. Soon Mason (who "just felt like trouble") holds up a bodega and, after he lands in jail, expects the Counts to "rough up" the store owner so the man won't testify. Rise winds up dealing coke, while Jesse, his mother and a cop restate the book's message that "almost everything that was going down wrong in the hood was based on people dealing." Jesse's parents seem vague, and the motives of Rise's murderer, a kid called Little Man remain unclear. But perhaps these elements simply bolster the seemingly random acts of violence in Jesse's world. What comes through clearly is that CJ and Jesse have a way out—CJ through his musical talents and Jesse with his artwork, nicely demonstrated in Christopher Myers's black-and-white drawings, as well as in the father-son team's clever comic strips. Ages 14-up.