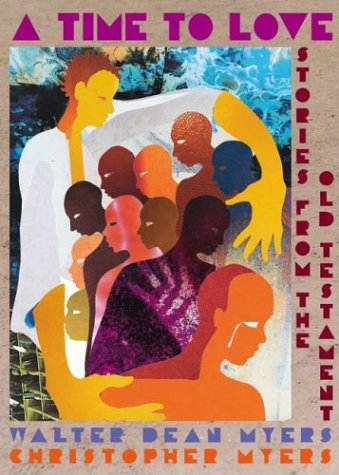 A TIME TO LOVE: Stories from the Old Testament

The father-and-son team behind the Caldecott Honor book recasts a half dozen episodes from the Bible with teen narrators, giving the audience new ways of viewing age-old stories. Assuming the perspectives of supporting players—including some traditionally viewed as evildoers—author and artistthrow the characters' human frailties into high relief.

The Philistine Delilah takes on a kind of nobility in the opening story; the author portrays her as a 15-year-old torn between love for the Israelite Samson and love for her people. Against blood-red backdrops, Christopher Myers draws intimate black-and-white pencil portraits of the couple, the close-up of the blinded Samson conveying both strength and vulnerability. Gaining readers' empathy, Walter Dean Myers selects the most compassionate of Joseph's 11 brothers, Reuben, to describe his brothers' vengeful reactions` to their father's favoring of Joseph and to Joseph's prideful nature. The dramatic collage cover image, taken from "Reuben and Joseph," depicts the moment of forgiveness: Joseph's arms envelop all 11 brothers, two of whom turn away, and one of whom—Reuben—cries. Perhaps the most powerful of the six tales is Isaac's narration of his journey up the mountain with his father, as the boy first believes that his father will make a sacrifice of himself and gradually realizes that he, Isaac, is the sacrifice.

The design ensures that the look of the volume matches the contemporary and accessible qualities of the prose. Display type in a distinctly 20th-century font immediately marks the work as modern. Christopher Myers uses up-to-the-minute techniques, too; for example, a contemporary photograph is the focus of each of the mixed-media chapter openers. He applies a different style to the illustrations for each tale (photocollage for the story of Lot, Egyptian-like drawings for the plagues, etc.). This fresh aesthetic approach underscores the collection's implicit message: there are numberless ways to behold sacred stories. Ages 12–up.