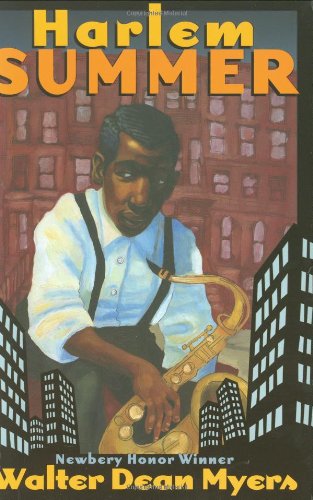 Myers's ( ) historical novel pays tribute to the many well-known African-Americans on the rise during Harlem's Renaissance, through the eyes of 16-year-old Mark Purvis. It's the summer of 1925, and Mark's family has just received a financial setback, making it impossible to send Mark's older brother to college. Mark wants to help out, but well-paying jobs are hard to find. He thinks his job at , a magazine that promotes Dr. W.E.B. DuBois's concept of "the New Negro" is fine, but not very exciting, and while he befriends the poet Langston Hughes, he longs to play jazz with the great Fats Waller. When Fats offers Mark a way to make some fast cash, he feels funny about it ("You didn't make no five dollars in one night unless you were doing something a little on the shady side") but agrees, hoping he can parlay it into a chance to jam with Fats. But the job goes awry and Mark winds up the fall guy. He has to set things right (a shipment of bootleg is stolen) or deal with the mob. Myers's humorous coming-of-age story reflects the paradoxically playful yet dangerous atmosphere of the 1920s. At the same time, readers learn about the many contributions African-Americans have made to this nation, underscored by the brief bios and photos in the concluding pages. Ages 12-up.