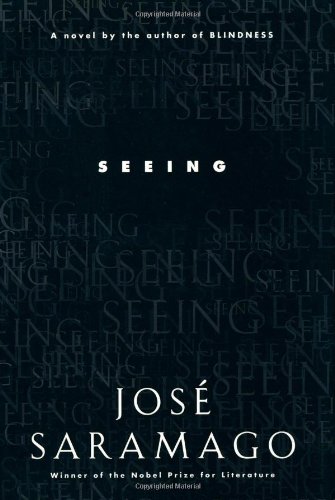 In Nobel Prize–winner Saramogo's best known novel, , an unnamed capital city experiences a devastating (although transient) epidemic of blindness that mysteriously spares one woman, an eye doctor's wife, who helps a blinded group survive until their sight returns. His new novel, set in the same capital city four years later, depicts a legal "revolution," when 83% of its citizens cast blank ballots in a national election. The president declares a state of siege, but even though soldiers cordon off the city, nothing affects the city's maddening cheerfulness. The president receives an anonymous letter revealing the case of the eye doctor's wife (she and the group she helped had kept her support secret), and the minister in charge of internal security sends undercover policemen to investigate her connection to the "blank" revolution. The allegorical blindness/sight framework is weak and obvious, and Saramago's capital city sometimes reminds one of Dr. Seuss's Whoville. Yet it works: as the novel establishes its figures (the pompous president, tremulous ministers and pantomime detectives), it acquires the momentum of a bedroom (here, cabinet) farce, baldly sending up EU politicos and major media editorialists.