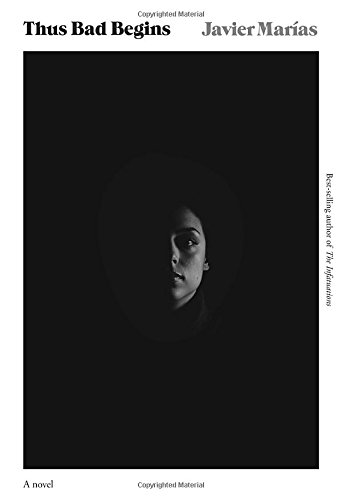 Javier Marías has entered that rarefied space in which a writer becomes essential to society. He is a critical conscience who can express what philosophers and political scientists can’t. The subtle perfection with which he exposes trivial acts, in turn revealing silent, shady agreements that add grease to the political machinery of society, has injected new vigor into the otherwise antiquated Spanish realism. His work is a call for political responsibility in everyday civil life.

Marías sets Thus Bad Begins in an aberrant moment in recent Spanish history: the years between the death of the dictator Francisco Franco in 1975 and the moment in 1981 when the country overcame the shadow of Catholic totalitarianism by finally ratifying a law that allowed divorce in 1981.

Thanks to family connections, a recent graduate from college gets a position as the personal assistant of a mid-ranking film director. The job description includes script correction, entertaining guests, and keeping company with the director’s mentally abused wife. The novel takes off when the director asks the assistant to embark on a murky investigation to find out whether some ugly rumors about one of his friends are true. The research takes the young man through the last phases of his coming-of-age as he discovers that the liberties his generation enjoys are based on an agreement of silence between the winners and losers of the Spanish Civil War. This agreement translated into a humiliator/humiliated relationship during the unbearable 36 years of Franco’s fundamentalist regime. The director’s household—his miserable marriage, which can’t be dissolved, and the court of literati and celebrities who make up his regular entourage—becomes a metaphor of the bigger house of Spain and the decisions taken by the political and cultural elites to rush into an open society, skipping all effort to bring any closure to past wounds.

If historical periods were lives, Thus Bad Begins would be situated in the infancy of the democratic pro-European Spain of our time and its little dramas and glories, its actual deficiencies and virtues. It’s not that Marías pretends to analyze Spain on the Freudian couch—Spanish society is famously impervious to psychoanalysis and its by-products; it’s that by placing his story during that moment in history, the author can propose a theory about the reckless exchange of values in a society that went from ultraconservative to ultraliberal in record time.

Marías acquired recognition as a master storyteller thanks to his natural hand at developing complex plot lines and a style that redefined the notion of precision in Spanish writing. As years go by, his writing—rendered into English with grace by Margaret Jull Costa so that I never felt as though I was reading a translation—is still that of a virtuoso. His storytelling has evolved into a more reflexive, denser, meditative voice. Thus Bad Begins is a novel, of course, but it could be perfectly read, too, as a beautiful, savage essay on hypocrisy.

Álvaro Enrigue’s most recent novel, Sudden Death, was published in the U.S. by Riverhead. Enrigue was born in Mexico and lives in New York City.