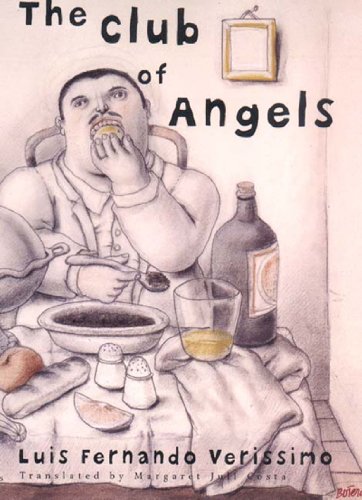 THE CLUB OF ANGELS

The first novel by this Brazilian literary and journalistic celebrity to be translated into English offers a rare and wonderfully barbaric story. The Beef Stew Club is a collection of middle-aged gourmands who meet each month to indulge in extravagant dinners. After the death of their leader, Ramos, from AIDS, a new member appears almost magically to take his place. The elusive Lucidio is a remarkable cook—but after each of his meals, one member of the club dies. The club members' enthusiasm for their quiche, duck with orange sauce and paella might, indeed, make readers themselves want to indulge; as narrator Daniel puts it, "the possibility of dying really did have an effect on the taste buds... one ate in a state of exaltation, of near euphoria." The novel is an apparent whydunit—although we think we know who did it, we are uncertain —until the end, when our certainty of the culprit becomes, as in all great mysteries, utterly derailed. On the way to his maniacal conclusion, Verissimo serves up a critique of male bonding (spoken through the gourmands' disapproving wives and girlfriends), along with a withering probe into the motivations of his eccentric characters, many of whom are variously frustrated and seek transcendence in the satisfaction of their palates. The book's pleasure is increased, as well, by the witty and deft illustrations by Verissimo himself (which recall Picasso's sparer moments) and the sure-footed, expert work of translator Costa. This swift and acidic portrait of a (literally) poisoned network of friendships has a bite that endures because of the great intelligence underlying it.

The Club of Angels