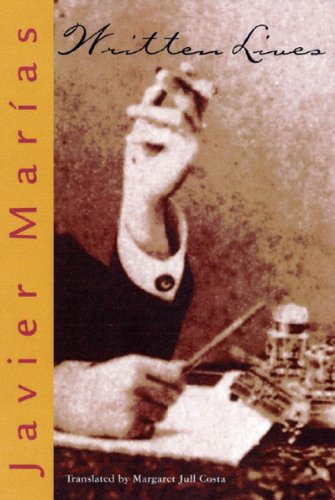 The writers whose lives are sketched in this quirky and appealing book by the world-renowned (though less so here) Spanish writer Marías are familiar to any avid reader: Oscar Wilde, Henry James, Djuna Barnes and William Faulkner, among others. Marias says his aim is to examine writers about whom "absolutely everything" is already known and portray them "as if they were fictional characters." He distills each writer's salient personality traits to outline definitive if idiosyncratic portraits: thus "Nabokov in Rapture"; "Ivan Turgenev in His Sadness." Almost all of these essays display Marías 's dry humor and affectionate tolerance for his subjects' eccentricities, but the portrayals of Thomas Mann, James Joyce and Yukio Mishima bristle with Marías 's disdain. And sometimes the title phrase is tailored to an idée fixe rather than intrinsic to the subject ("Robert Louis Stevenson Among Criminals"). The book is distinguished by supple turns of phrase and bon mots ("every true gentleman has behaved like a scoundrel at least once in his life") and by the photos of each writer from the author's own collection. Reading these portraits is addictive; one keeps turning pages in anticipation of Marías 's keen and amusing analyses.