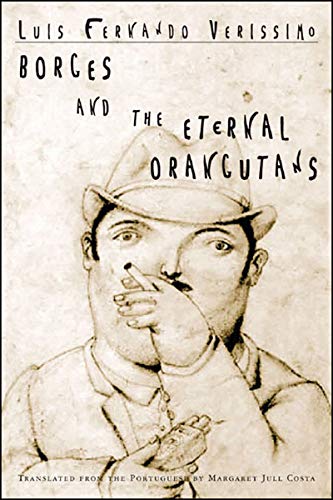 BORGES AND THE ETERNAL ORANGUTANS

Brazilian author Verissimo's delightful novel simultaneously caricatures the complicated codes that comprise detective stories and spins a whodunit of paternity, academic intrigue, 16th-century occultism and orangutans. The action occurs at the annual meeting of the Israfel Society, an eccentric organization devoted to the study of Edgar Allan Poe, which Vogelstein, a sheltered teacher and translator, decides to attend in the hopes of meeting his hero, Jorge Luis Borges. When Vogelstein discovers the unlikable Rotkopf, another conference attendee, stabbed to death in front of a mirror, it falls to Borges and Vogelstein to solve the crime. Is the murderer Professor Ikisara, who was angry at having to travel to Buenos Aires for the conference and at having been trampled, twice, by Rotkopf during the welcoming cocktail party? Just as suspicious is Oliver Johnson, the humiliated butt of an elaborate scholarly joke perpetrated by the victim. But maybe it was Hastur, "a malign spirit" rising from the , a list of every evil being on Earth. Will the amateur sleuths uncover the motive and the murderer, or will they accuse someone based on potentially fruitful "literary possibilities"? Borges claims that one "write[s] to remember," but Verissimio ( ) demonstrates that one also writes to pay homage, to provide pleasure and to have fun.