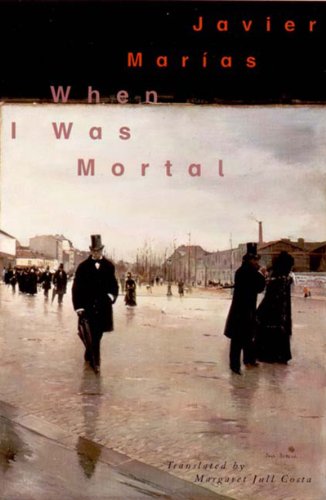 When I Was Mortal

Like Borges, who felt that every story benefited from a good mystery, Mar as (A Heart So White) packs murder, intrigue, even ghosts into nearly every one of the dozen short narratives in this collection. Mar as, one of Spain's most prominent contemporary writers, shows his macabre playfulness right from the start. In ""The Night Doctor,"" a dinner party leads to a nighttime walk through Paris, and introduces two similar Italian women with similarly unpleasant husbands, and a mysterious doctor whose evening visits may put a permanent end to their marital problems. In ""Broken Binoculars,"" a seemingly innocuous conversation at the racetrack develops into a frank discussion of assassination. ""Flesh Sunday"" features a man looking out from the balcony of his honeymoon hotel room. While his wife lies on the bed behind him, he watches a woman who may--or may not--be waiting for him. These tales, like others in the collection, are enigmatic, almost elliptical, and are related by a narrator distinguished by his urbane wit and unflappability. The one long story here, ""Blood on a Spear,"" typifies the author's taste for misdirection. The intriguing opening scene shows the narrator's friend murdered, impaled on his bed with a naked woman by his side. As the unnamed narrator investigates, he learns that little is as it initially seems. In a foreword, Mar as reveals that nearly all the short fictions were written on commission, and that many came with external requirements (such as a summer setting, or a crime element), which heightened Mar as's literary gamesmanship. The foreword also discloses, amusingly, that ""Broken Binoculars"" originally appeared with the first page accidentally discarded, in what Mar as calls ""the worst printer's error ever perpetrated on one of my texts."" (Apr.) FYI: Mar as won the 1997 International IMPAC Literary Award for A Heart So White.
close
Details