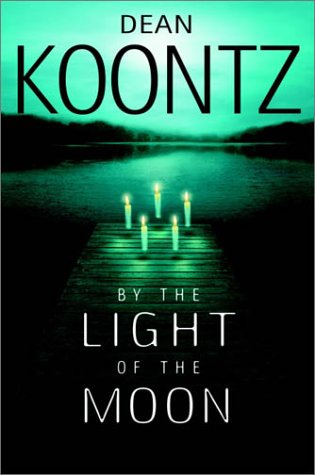 BY THE LIGHT OF THE MOON

Perhaps more than any other author, Koontz writes fiction perfectly suited to the mood of America post–September 11: novels that acknowledge the reality and tenacity of evil but also the power of good; that celebrate the common man and woman; that at their best entertain vastly as they uplift. His latest is one of those best, exciting and deeply moving, shorter than usual and also less prone to the overwriting, the flood of similes and metaphors, that sometimes overwhelms his storytelling. As usual for Koontz, the novel opens at full throttle: a mad doctor invades a motel in Arizona, injects both itinerant artist Dylan O'Connor and struggling comic Jillian Jackson (strangers to one another) with an unknown substance that, he says, is his life's work and will have some unknown effect, then warns them to flee before his enemies kill them; soon after, the doctor is slain by heavily armed assailants. The rest of the story is an extended chase, as Dylan and Jillian, along with Dylan's high-functioning autistic brother, Shep, dart around the West, only steps ahead of the assassins. Within hours, the effects of the injections materialize: Jillian experiences portentous visions—a flock of birds, a woman in a church; Dylan is overcome by the need to rush to the aid of people in distress (among others, in an intensely poignant scene, an elderly man searching for his missing daughter); and Shep learns to teleport himself and others. (Interestingly, Koontz bases the science behind these developments on nanotechnology, the same mechanism used by Michael Crichton in his just published , an object lesson in how two writers can take the same premise and generate two very different yet excellent novels). The novel's only flaw is its abrupt ending, contrived probably to allow sequels—a probability that Koontz fans, but also anyone else who reads this novel, a predestined bestseller and rightfully so, will applaud.