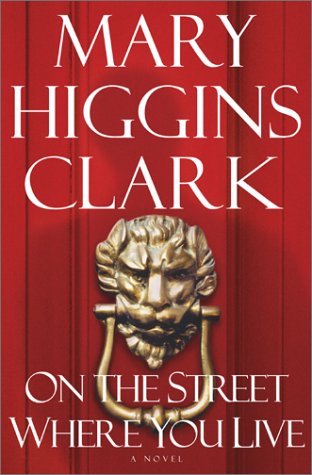 ON THE STREET WHERE YOU LIVE

Is a reincarnated serial killer at work in a New Jersey resort town more than a century after he first drew blood? That's the catchy premise that supports Clark's 24th book. In the 1890s, three young women in the upscale seaside village of Spring Lake died at the hands of an unidentified killer. In the present day, two young women have disappeared from town—and their killer, whose first-person ruminations vein the third-person narrative, is preparing to strike again. His final target will be Emily Graham, an ambitious young attorney just moved to Spring Lake from upstate New York, where she'd been victimized by a stalker. Emily is a typical Clark heroine, bright and beautiful, and the friends she makes and suspects she meets in Spring Lake are her equal in stereotype, among them a former college president with a dread secret; a failed, aging restaurateur with a much younger wife; and a hunky real-estate agent. Emily's dream of a new start in the house once owned by her ancestor—the first victim of the killer of yore—sours when the body of a present-day victim is found buried on her land along with remains of her murdered ancestor. The dream curdles further when more bodies turn up and Emily's upstate stalker reappears. This is a plot-driven novel, with Clark's story mechanics at their peak of complexity, clever and tricky. There's some nifty interplay between past and present via diaries and old books, some modest suspense, and a few genuine surprises, including the identity of both the stalker and the killer. Clark's prose ambles as usual, but it takes readers where they want to go—deep into an old-fashioned tale of a damsel in delicious distress. The first printing is one million; that, and Clark's popularity, will be enough to push this title to #1.