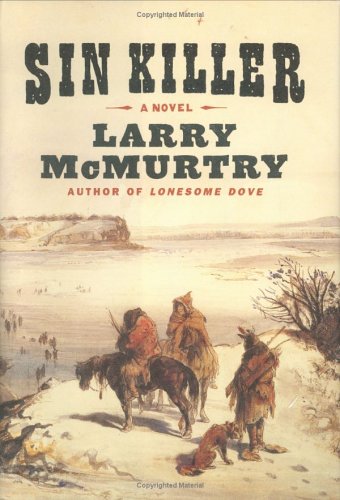 Part western, part satire of the English class system contrasted with rugged frontier society, the first volume of this proposed tetralogy gets off to a shaky start as McMurtry introduces the randy, bumbling Berrybender clan, a rich but inept aristocratic British family that journeys up the Missouri River to try to capitalize on the land boom of the 1830s. The early romantic subplot shows promise when beautiful but flighty Lady Tasmin Berrybender, temporarily separated from her group, is rescued by Jim Snow, a quiet, religious trapper known as the Sin Killer, both for his piety ("I'm hard on sin") and for his fierce fighting skills. Snow returns Tasmin to the family vessel, and his sudden marriage proposal delights Tasmin, until she discovers that he already has two Indian wives. The other narrative lines aren't nearly as entertaining, as McMurtry veers back and forth between outlining the war between various rival Indian tribes and trying to generate comic sparks with the Berrybenders' ongoing series of pratfalls. He has some brief success in the later chapters when Tasmin defies her pompous father, Lord Berrybender, as he tries to undo the marriage to keep the family bloodline pure, and Jim Snow remains an intriguing figure throughout. But much of the light comedy lands with a thud, and the introduction of a raft of mostly superfluous characters takes the edge off McMurtry's prose and makes the Berrybenders seem silly and inane rather than charming. McMurtry does plant a few promising plot seeds for the ensuing books, but it will take a more focused and genuinely humorous effort the next time out to make this concept work. While the narrative fails to satisfy as a true western, readers should enjoy McMurtry's portrait of the terrain bordering the Missouri River. Future volumes will be set on or beside three other rivers, the Yellowstone, the Rio Grande and the Brazos.