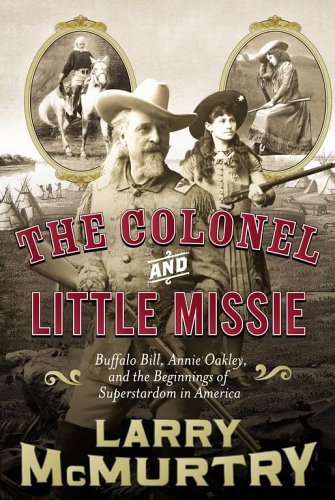 The Colonel and Little Missie: Buffalo Bill, Annie Oakley, and the Beginnings of Superstardom in America

As is McMurtry's wont in works of nonfiction (e.g., ), this dual bio reads more like an extended elegy than biography. Buffalo Bill Cody and Annie Oakley, the demigods of western mythology, hold particular personal appeal for McMurtry. In a diner in his hometown of Archer City, Tex., McMurtry writes, "[T]here is a Cody poster that I sometimes study if I happen to land in the right booth," and as a child he heard his uncles recollect having seen Cody perform.

This personal attachment doesn't obscure the quality of McMurtry's observations, and the book's aim, to separate fact from folklore, is beautifully accomplished. The Wild West show—and all of its mytho-historical components, such as riding the Pony Express, hunting bison, killing Tall Bull, scalping Yellow Hair—both distorted and magnified western heritage to a level of fantasy that captivates readers, including McMurtry, to this day. He smartly analyzes Cody's genius for PR, evidenced in such tactics as continually announcing that his next tour would be his last and seeing that cowboys' informal roping competitions could be turned into money-making rodeo shows.

It's jarring when McMurtry tries to explicate Cody and Oakley's unprecedented fame by comparing them to today's pop stars, as in analogizing Annie Oakley's prima donna stage behavior to that of Martha Stewart and Courtney Love. Regardless, this book's a delight. 16 pages of b&w photos not seen by