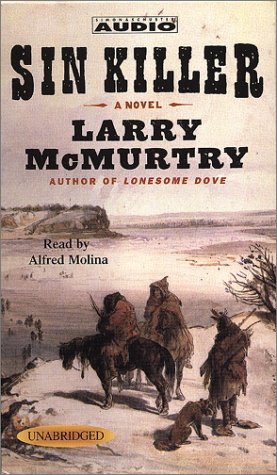 "I'll see him in anything, " said Bob Dylan of Gregory Peck. After listening to McMurtry's latest, many listeners will say the same about hearing any audiobook read by screen and stage actor Molina. His chameleon-like talent for convincingly portraying one darkly comic character after another is masterfully applied to the story of the Berrybenders, a 19th-century aristocratic family who, on a whim, have decided to leave their home in England to explore the great unknown frontier of America; according to Lord Berrybender, one of the main reasons for the journey is the opportunity to shoot animals that he hadn't shot before. Ironically, the character of the frontier itself shares Lord Berrybender's absurd and casually cruel perspective. Savage attacks, vicious weather and unforeseen disasters all take their toll, as the folly of hubris is exposed and those possessing it are weeded out. The tale revolves around the adventures of one of the three Berrybender children, Tasmin, a headstrong young woman. She's smitten by Jim Snow, a complex amalgam of Indian fighter, preacher and frontier survivor who goes by the name Sin Killer. This first volume of a projected four-part series leaves the listener yearning for more. If Molina lends his phenomenal skills to the rest of the tetralogy, it will surely be anticipated by a satisfied and dedicated audience.