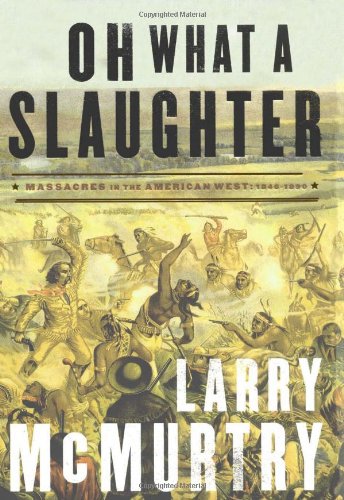 Pulitzer Prize–winning novelist McMurtry ( ) recounts six Western frontier massacres in this meandering mixture of memoir, literary criticism, jeremiad and history. "In most cases," McMurtry acknowledges, "the only undisputed fact about a given massacre is the date on which it occurred." Rightly enough, such disputes don't keep him from approaching these subjects with strong opinions. "Whites killed whites" at Mountain Meadows (1857); "a camp of one hundred percent peaceful Indians" was attacked at Sand Creek (1864). At Marias River (1870), Blackfeet Indians "dying anyway" of smallpox were slaughtered, and at Camp Grant (1871) "all the people killed—excepting one old man and a 'well-grown' boy—were women and children." McMurtry's easygoing voice and hop-and-skip pace leave comprehensiveness to the many books to which he refers, but his own volume would have been stronger, and more accessible to readers unfamiliar with frontier history, if it had been organized more systematically. As is, the book feels tossed off, and his passing references to contemporary massacres—in Rwanda, New York and Iraq, for example—don't add much resonance.