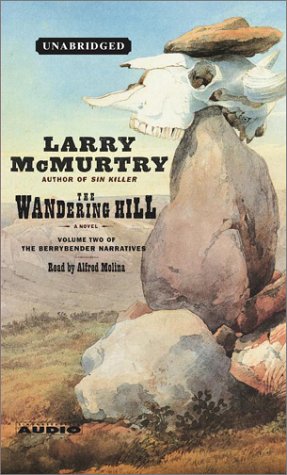 THE WANDERING HILL: A Novel

HFans of Molina's reading of , the first volume in McMurtry's over-the-top Berrybender Narratives, will be pleased to find that he has lent his considerable talents to this second volume. Again, the marriage of McMurty's capable storytelling and Molina's dramatic reading gifts create a sum that is greater than its parts. The Berrybenders are a noble English family bent on exploring the Wild West in the 1830s. Just as the West holds no sympathy for its inhabitants, so it is with the Berrybenders, whose lives are rife with dark wit and unexpected (and often strangely humorous) violence, as when Lord Berrybender, himself "whittled down" by a leg, seven toes and three fingers, pokes out his son Bobbety's eye with a carving fork. As with all their hardships—stampedes, murderous Indians, grizzly bears, etc.—the victim as well as his family take this in stride. "You've made Bobbety a Cyclops, Papa," says young Mary Berrybender, "only his one eye is not quite in the middle of his head as it should be in a proper Cyclops." Listening to Molina capture the comic subtleties of every character—from the shy young Kit Carson to the Berrybenders' pet parrot—is to experience the art of the audiobook at its very best.