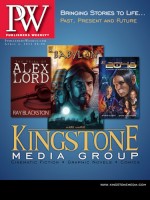 Scribner Checkmates 'Katwe'
Chris Parris-Lamb at the Gernert Company sold U.S. rights to Tim Crothers's The Queen of Katwe to Scribner. Paul Whitlatch at the Simon & Schuster imprint acquired the nonfiction book at auction. In the book, Crothers, a former staff writer at Sports Illustrated, chronicles the inspirational rise of an unlikely chess prodigy, Ugandan Phiona Mutesi. Barely literate at 11, Mutesi was taught to play chess by a local missionary (and former resident of her slum); three years later, she was competing in the 2010 Chess Olympiad. The book, which grew out of an ESPN the Magazine article, will be one of Gernert's lead titles at the London Book Fair and has sold in Canada, Israel, and Italy; CAA (working on behalf of Gernert) sold film rights to Disney.

S&S Gets Young-Stone's 'Survivors' & Orangette's Latest
Simon & Schuster's Sarah Knight bought world rights to two books by Michele Young-Stone. Michelle Brower at Folio Literary Management brokered the deal for Young-Stone, who was in PW's 2010 First Fiction feature for her debut novel, The Handbook for Lightning Strike Survivors (Crown). The first novel, Perfect Birds, is set in the '60s and follows a woman who is institutionalized after falling for her female best friend. In the second book, The Saints of Los Vientos, a girl discovers she shares a birth defect, which some might consider a gift, with her now-deceased Lithuanian great aunt. Knight acquired Young-Stone's debut while still at Crown.

In another acquisition at S&S, Trish Todd bought world rights to a memoir called Delancey by Orangette blogger Molly Wizenberg. Wizenberg started her food blog in 2004 and, growing out of its popularity, landed a book deal (for 2009's A Homemade Life) and launched a restaurant (Delancey, in Seattle). In the new memoir, which Michael Bourret at Dystel & Goderich sold, Wizenberg chronicles the beginning of married life—she met her husband through her site—and the trials and tribulations of starting a restaurant (which she did with her husband).

The TSA Speaks... to Macmillan
Kip Hawley, former head of the Transportation Security Administration, sold an insider account of his time with the agency to Palgrave Macmillan. Emily Carleton bought world English rights to the book at auction from Jason Allen Ashlock at Movable Type Literary Group. Ashlock said the book is a "no-holds-barred take on the TSA's decade-long battle against terrorism."

YA French Bestseller Hits Hollywood
Warner Brothers acquired film rights to Eli Anderson's The Adventures of Oscar Pill. The five-book middle-grade/YA series about a teen who can travel within the human body is a bestseller in France, and rights have been sold in Brazil, Greece, Italy, Japan, Korea, Poland, and Turkey. (The series has just been submitted for acquisition in the States.) Susanna Lea, of the Paris literary agency Susanna Lea Associates, brokered the deal, and David Heyman and Jeff Clifford, of Heyday Films (the British production company behind the Harry Potter films), are attached as producers.

Briefs
Maria Gagliano at Perigee took world rights to Marketwatch.com media columnist Jon Friedman's book about Bob Dylan. and Friedman said he will "discuss the mysterious genius of Dylan" as well as examining the lasting legacy of the icon, who turns 70 in May. Agent Lynn Johnston sold the book, which is scheduled for 2012.

Agent Laura Dail sold world English rights to Mika Shino's baby food cookbook, Smart Bites. Shino, a mom who also trained at the Cordon Bleu, delivers more than 100 recipes that Dail said elevate baby food with ingredients (ranging from fish to nuts to soy) that are "proven to stimulate the development of the brain." Dail added that the book is coming at a moment when we are "due for a revolution in pediatric nutrition." Katie McHugh at Da Capo acquired the title, which is scheduled for spring 2012.

A version of this article appeared in the 04/04/2011 issue of Publishers Weekly under the headline: Deals: Week of 4/2/11
TOC
ADVERTISEMENT
More from pw