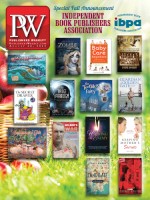 Finding awe—in just about anything—has led Amy Stewart to revel in intense research, which has been integral to her six nonfiction books, all published with Algonquin. Her most recent, the bestselling The Drunken Botanist (2013), is the result of the awe she felt for gardening in her first book, From the Ground Up (2000). This September, Houghton Mifflin Harcourt is bringing out Stewart’s fiction debut, Girl Waits with Gun, based on the true story of one of the first female U.S. sheriffs.

For her novel, Stewart kept to her usual research-heavy process. It began with the story behind the story in a newspaper clipping she came across while doing research for Botanist. Dated 1914, the news piece detailed an incident in Paterson, N.J., involving a silk merchant’s car colliding with a buggy carrying three maiden sisters—an incident that would change all of their lives.

At Stewart’s desk in her book-lined attic office—which takes up an entire floor in the Victorian house in Eureka, Calif., that she shares with her college-sweetheart husband, Scott Brown—she explains that she was double-checking information about gin smuggler Henry Kaufman for The Drunken Botanist when she came upon the clipping. The owner of the silk merchant’s car was also named Henry Kaufman. “So I find this article in the New York Times about a Henry Kaufman—although I could never be sure it was the same one as the gin smuggler,” Stewart says. “The article was about the ensuing trial and I thought, this is kind of interesting and weird.”

At the trial, according to the report, eldest sister Constance Kopp testified against Kaufman, who not only refused to pay for the damage done to the buggy but was accused of sending letters tied to the infamous Black Hand, an extortion racket of the time, that threatened the youngest sister, Fleurette, with kidnapping and enforced prostitution. It was a detail too bizarre for rabid researcher Stewart to resist.

Girl Waits with Gun might be Stewart’s fiction debut, but finding inspiration for a new book from an awe-inspiring detail she stumbles upon has become her modus operandi. It began when, married to Brown and living in Santa Cruz in the mid-1990s in a rental property that desperately needed beautification, she wrote the memoir From the Ground Up: The Story of a First Garden. A chapter about worms in that book led Stewart to book #2, The Earth Moved: On the Remarkable Achievement of Earthworms (2004).

In between the two books, Stewart and Brown moved north to Eureka, which Stewart soon discovered is one of the flower industry capitals of the world, and her curiosity about that inspired Flower Confidential: The Good, the Bad, and the Beautiful in the Business of Flowers (2007). During an interview for Flower Confidential, a grower talked about a poisonous plant; this got Stewart making a list of famous people killed by plants, starting with Socrates, which led to her next book, Wicked Plants (2009), followed by Wicked Bugs (2011).

While working on Wicked Plants, Stewart planted her so-called wicked garden, a collection of poisonous plants, which was featured in the New York Times. Stewart has been on NPR many times, talking about icky things, and her work has inspired a wicked garden at New York City’s Brooklyn Botanical Garden.

Stewart explains that she transformed her wicked garden into a spirit garden because growing plants that make good booze (done in the name of research for Drunken Botanist) is more practical than growing plants that produce poison. These days, between speaking engagements that keep Stewart on the road for half the year and a strict 1,000-words-per-day-every-day (including Thanksgiving and Christmas) writing schedule, there’s little time for her to make use of the offerings from her spirit garden.

Also, the couple are partners in Eureka Books, a new antiquarian bookstore in Eureka’s old-town section, where Brown works while Stewart writes in her attic office. When Brown came home one day while Stewart was working on Botanist and asked what strange thing his wife had spent the day exploring, she said, “No plants today, but look at these women,” and she showed him a news article titled “Girl Waits with Gun,” about a sheriff who enlisted Constance Kopp’s help in an attempt to get evidence against Kaufman and armed her for the task.

Using the bookstore’s Ancestry.com account, Stewart and Brown spent the rest of the night doing research and produced a partial Kopp family tree. How did three sisters come to live by themselves on a farm outside of Paterson? And why would Sheriff Robert Heath, assigned the case under his jurisdiction in nearby Hackensack, involve Constance in his investigation of Kaufman and a possible connection to the Black Hand, which was terrorizing the state at the time? Convinced she had the kernel of a good story, Stewart did what she always does with something that strikes her as curious: she went into research mode, big time.

With no ties to Patterson, Hackensack, or any of the other places the Kopp story referenced, Stewart hired a genealogist based in northern New Jersey and booked an Airbnb in New York City’s East Village. She commuted to New Jersey to do her research on the ground—literally standing on the streets in front of buildings, and even in a creek on the Kopp land, as she repeatedly visited sites associated with the story.

At the Hackensack jail—the same building where the Heaths lived in 1914, which is now preserved as a historical site—no one had ever heard of Constance. But the PR guy they sent out to appease Stewart perked up when she mentioned Sheriff Heath and gave her photos taken of and by the lawman.

Stewart amassed piles of photographs of everyone involved (although it maddens her that she could not find one of Norma, the middle Kopp sister), news clippings, copies of documents, and even microfilm. Through Ancestry.com and Facebook, Stewart was able to meet with Fleurette’s son. “It was one of the most extraordinary days of my life,” she says. “To me, it’s just insane to think that there are people walking around on our planet right now who knew these people whom I’ve written about.”

Fleurette was a fashion plate and singer, her son told Stewart, and he confirmed that Norma was the blunt-talking, outdoorsy type of Stewart’s imaginings. And Constance had no interest in farming, or, unusual for women of the time, raising a family.

New Jersey at the brink of WWI proved a particularly interesting place for women, Stewart says. “There still were very much these creeky Victorian values and Victorian dress,” she says. Living in her own Victorian home, even 3,000 miles away, gave Stewart some sense of the period in which the Kopps lived, but she was thrilled to learn details from Fleurette’s son, such as that Constance was a physically imposing woman who was uncharacteristically independent for her time and scared her own niece. “I like to think of this little girl living in this very cloistered world, and then there’s Aunt Constance who’s a total badass with a gun in her hand,” Stewart says.

At first Stewart was not sure what to do with the Kopp sisters. “I thought, if I do it as fiction, maybe I can better capture them and the sheer, amazing weirdness of that time period.” Stewart even immersed herself in fiction of the time—it does pay to have a rare book dealer husband—to create a novel with a pace of a modern page-turner that also reads as if written in the early 20th century. “At some point I had to let go of their real story so that I could create fictional characters,” Stewart says, explaining how she invented a character named Lucy with a missing child so that she could take the story inside Kaufman’s textile factory in Paterson on the heels of the infamous silk strikes. She found news clippings from the time about destitute unemployed factory workers who sent their children out on the streets or on trains to New York, with notes pinned to their clothing pleading for strangers to help them.

The adage “truth is stranger than fiction” has always propelled Stewart. For Girl Waits with Gun, she says, “the challenge I set for myself was stitching together the gaps between real events and trying to explain them. But it’s nice to be able to just tell lies when you want to.”

Fiction is what Stewart reads for fun, and she admits to having a few original novels sitting in drawers. Those books might never be published, but writing fiction will remain in her future. HMH made a three-book preemptive bid for Girl Waits with Gun, so Stewart’s nowhere near done with Constance and her sisters. That leaves a lot of pages for Stewart to fill with her discoveries.

Bridget Kinsella is a writer and editor living in Northern California. She’s the author of Visiting Life (Crown, 2007).

A version of this article appeared in the 08/24/2015 issue of Publishers Weekly under the headline: Finding Fiction in Facts
TOC
ADVERTISEMENT
More from pw