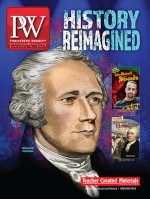 The Top 10 Print Book and Amazon Kindle Bestsellers of 2016

It should not prove too surprising to anyone familiar with the publishing industry that, in a year that saw two new Harry Potter titles published, one of them would top the print bestseller list. The only surprise here is that, unlike previous titles, the latest from author J.K. Rowling, Harry Potter and the Cursed Child: Parts 1 and 2, is not a novel but a play and was penned in conjunction with coauthors—the theater director John Tiffany and the screenwriter and playwright Jack Thorne.

The script, published on July 31 last year, moved nearly 4.5 million units by year’s end at outlets that report to Nielsen BookScan—just shy of four times the number of copies sold of the #2 on the print bestseller list, Double Down, the 11th installment in Jeff Kinney’s Diary of the Wimpy Kid series. (Rowling’s other major Potter entry this year was the screenplay for the film Fantastic Beasts and Where to Find Them, which has moved 659,172 units since its publication on November 18.) Kinney, like Rowling, is no stranger to this list; his 10th Wimpy Kid volume, Old School, hit #2 on last year’s list.

At #3 was Bill O’Reilly and Martin Dugard’s Killing the Rising Sun: How America Vanquished World War II Japan, the latest in their bestselling Killing series—the first to focus on a country rather than a singular historical figure. Last year’s powerhouse The Girl on the Train continued to sell well throughout the year, earning it the #4 slot on the print bestsellers list.

Easily the most surprising title to crack the top five was Swedish author Fredrik Backman’s A Man Called Ove, published by Atria Books imprint Washington Square Press in July 2014. The book was a favorite among indie booksellers, in spite of its meager first printing of 6,500 copies. In 2016—a year that saw the U.S. publication of Backman’s latest novel, Britt-Marie Was Here, and the U.S. release of Ove’s Swedish-language film adaptation—Ove pushed 712,283 units, putting it in the fifth slot on Nielsen’s list.

In the Amazon Kindle e-book store, Hawkins’s Girl on the Train found even more traction, hitting the top of the list for the second year running; her sophomore effort, Into the Water, will also be published by Riverhead and is due to release in May. Following one Girl was another, Robert Bryndza’s The Girl in the Ice, the first in a series of serial killer thrillers published by English digital publisher Bookouture. The book had sold more than a million copies by late September, according to Bookouture publisher Oliver Rhodes.

Rowling’s Cursed Child proved blessed in the digital market as well, landing at #3 on Amazon’s Kindle bestseller list for the year. Kristin Hannah’s sweeping work of WWII-era historical fiction, The Nightingale, hit #4 this year. The novel was published in February 2015 but crept up the list this year in comparison to last year’s list, on which it landed at #5. The fifth slot on the 2016 list went to Nancy Star and her novel Sisters One, Two, Three.

A version of this article appeared in the 01/09/2017 issue of Publishers Weekly under the headline: Potter Tops Print, ‘Girl’ Rides E-book Train
TOC
ADVERTISEMENT
More from pw