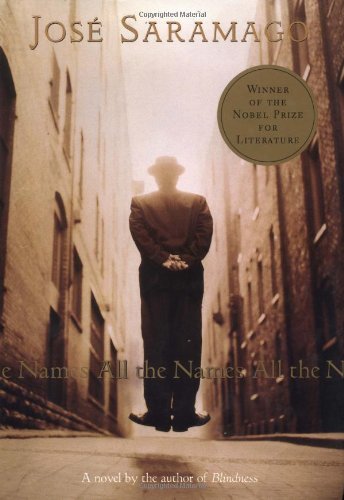 The deceptive simplicity of Nobel Prize-winner Saramago's prose, and the ironic comments that he intersperses within this story of an obsessional quest, initially have a disarming effect; one expects that this low-key exploration of a quiet man's eccentric descent into a metaphysical labyrinth will be an extremely intelligent but unexciting read. Unexciting: wrong. Within the first few pages, Saramago establishes a tension that sings on the page, rises, produces stunning revelations and culminates when the final paragraph twists expectations once again. The title refers to the miles of archival records among which the protagonist toils at the Registry of Births, Marriages and Deaths in an unnamed small country whose inhabitants still live by ancient rules of hierarchical social classes. The registry is quixotically disorganized so that the files of those most recently deceased are buried under miles of paper at the furthest remove of the massive building. After more than two decades at the job, 50-year-old Senhor Jos is still a mere clerk in the bureau. A penurious, reclusive, lonely bachelor, Senhor Jos has only one secret passion: he collects clippings about famous people and surreptitiously copies their birth certificates, purloining them from the registry at night and returning them stealthily. Purely by accident, the index card of a 36-year-old woman unknown to him becomes entangled in the clippings he steals. Suddenly, he is stricken by a need to learn about this woman's life. Consumed by passion, this heretofore model of punctilious behavior commits a series of dangerous and unprofessional acts. He forges official papers, breaks into a building, removes records from institutions and continues to enter the registry after darkDall punishable offenses. To carry out his mission, he is forced to become practical, clever and brave. But the more risks he takes, the more astonishing events occur, chief among them that the remote, authoritarian Registrar takes a personal interest in his lowly employee. Meanwhile, Senhor Jos himself discovers shocking facts about the woman he seeks. Saramago relates these events in finely honed prose pervaded with irony, but also playful, mocking and witty. Alternately farcical, macabre, surreal and tragic, this mesmerizing narrative depicts the loneliness of individual lives and the universal need for human connection even as it illuminates the fine line between the living and the dead. First serial to Grand Street, the Reading Room and Doubletake; QPB and Reader's Subscription Club selection; author tour. (Oct.)
close
Details