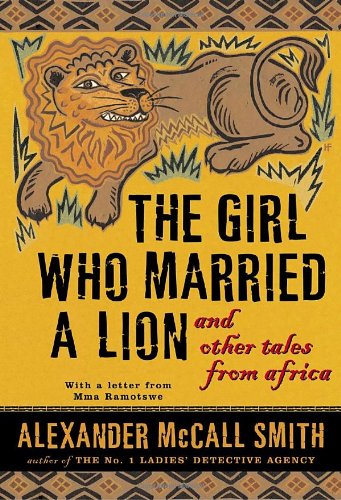 THE GIRL WHO MARRIED A LION: And Other Tales from Africa

Straying from the safety net of a bestselling series ( , etc.), Smith tells 40 traditional African folk tales with his by now signature humor, simplicity and reverence for African culture. With an introductory letter from No. 1 Lady Detective Mma Ramotswe as a preface, he sets the literary stage for a nostalgic stroll down his own personal memory lane. Born and raised in what is now Zimbabwe, Smith began collecting these stories as a child and combines them with several he gleaned from a friend who interviewed natives of Botswana. Many of the stories parallel classic Western tales, from Aesop to Mother Goose. The ubiquitous wolf-in-sheep's-clothing fable becomes a parable about a girl who unwittingly marries a lion. Other stories deal with familiar themes ranging from ingratitude (in "Head Tree," a man cured of a tree growing out of his head does not pay the charm woman her due) to vanity (in "Greater Than Lion," a hare outwits a conceited and boastful lion). However, many are uniquely African, such as the stories that explain why the elephant and hyena live far from people or how baboons became so lazy. These are pithy, engaging tales, as habit-forming as peanuts.

Children of Wax The No. 1 Ladies Detective Agency The Sunday Philosophy Club