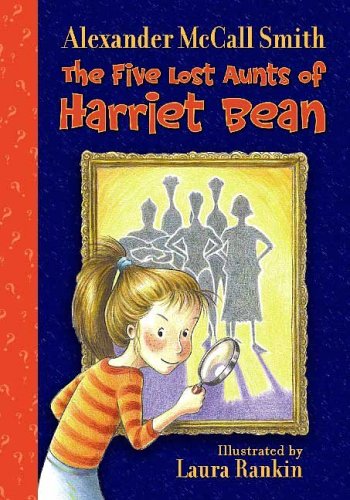 This paper-over-board caper, the first in a series by adult mystery writer Smith, combines humor and intrigue as it introduces a plucky aspiring sleuth. Nine-year-old Harriet Bean learns that her absent-minded father, an inventor of "useless" devices, has five sisters. She is astonished at the news—and at the fact that her father has lost track of them ("But what happened?... You can't have lost my aunts just like that," says she). Harriet's father reveals that his farming family, stricken by poverty, had to split up the siblings as children. He then shows Harriet an unfinished painting of him and his sisters as youngsters, explaining that his father couldn't afford to pay the artist to complete it. Harriet decides to track down her aunts so that the portrait ("with blanks where the heads should be") can be completed. Harriet's search leads to some amusingly madcap moments: Aunt Veronica, who performs as a strong woman in a circus, saves Harriet's dad from an elephant's stranglehold. And when they then track down Aunt Harmonica, an opera singer and ventriloquist, Veronica holds her sister upside-down so that she can sing after she begins choking on a lozenge just as the curtain rises. The remaining aunts possess a bit less pizzazz. Yet Smith adds ample comic twists to keep kids entertained, and Rankin's ( ) playful pictures (especially an artist's resourceful solution to the portrait problem) will likely bring readers back for (1-58234-976-2; also May). Ages 7-9.