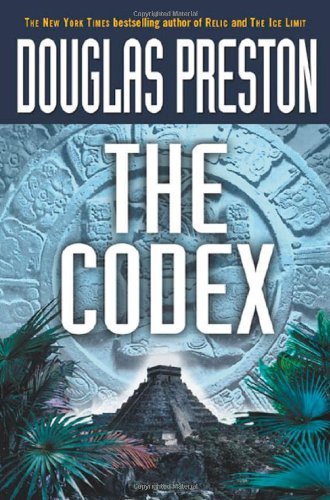 Half of the writing team responsible for , and other adventure bestsellers takes a solo flight, as Preston's writing partner, Lincoln Child, did in last year's . Like Child, Preston flies high and fast, turning in a briskly involving science-based thriller. The titular book is a Mayan artifact containing the sum of that people's knowledge about the medical applications of indigenous plants. The information is worth billions to any pharmaceutical company, but the Codex, along with numerous other priceless objects, was taken deep into the Honduran jungle by dying legendary tomb robber Maxwell Broadbent, to be buried along with him in a secret crypt. Max left instructions to his three grown sons that the only way to get their inheritance will be for them to track him and find the tomb. Max, who viewed his progeny as "quasi-failures," reasoned that by accomplishing this daunting task, the three—a veterinarian, a hippie spiritual seeker and a second-rate professor—will have proven themselves as men. What follows is rip-roaring jungle adventure, outfitted with a nasty villain (a sadistic PI who's also after the treasures), a beautiful blonde (partner to the vet), two memorable Indian characters, hosts of wild animals, terrific atmosphere and cliffhangers galore. The novel's main weakness is its lack of a strong central protagonist—the characters work more as an ensemble cast—such as Preston/Child have presented in their wonderful series detective, Special Agent Pendergast. Yet as always, Preston delivers the goods in a first-rate beach novel that most readers will be enjoying—at least in hardcover—while looking at snow rather than sand.