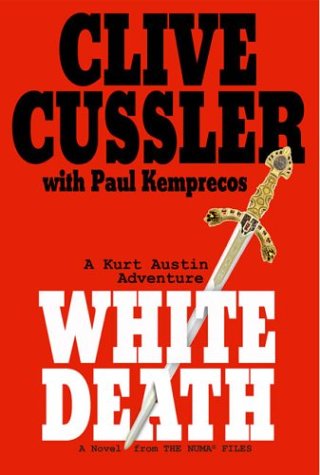 Cussler's multitude of fans arrive at the table expecting a roiling stew of seafaring adventure, exotic travel destinations, cutting-edge science, a splash of romance and insider tips on food and drink. In this latest starring series hero Kurt Austin (; ), readers will find all their expectations extravagantly fulfilled. The bronzed, rugged Austin, leader of the NUMA (National Underwater and Marine Agency) Special Assignments Team, and his partner, Joe Zavala, are called in to free survivors trapped inside a Danish warship sunk after a collision with the flagship of the radical environmentalist group Sentinels of the Sea. After a successful rescue, Austin's investigations lead him from the haughty environmentalists to the Oceanus Corporation, a shadowy fish farming organization: "A miasma of pure evil seemed to hang over the Oceanus operation." Austin sneaks into one of the fish farms on a solo recon and is nearly killed by the swarthy, black-clad, facially tattooed Eskimos of the evil Kiolya tribe who guard the company's many operations. The Kiolyas are led by albino madman Toonook, a genius fish geneticist who has engineered members of the harmless salmon family into a breed of 10-foot, piranha-like Frankenfish. All the villains have satanic smiles and pitiless eyes, and snarl their dialogue. If it all sounds highly preposterous, it is, but Cussler manages with his usual aplomb, impressively juggling his plots and bringing everyone home in an action-fueled, rip-roaring finale in which evil doers are soundly defeated and swashbuckling heroes reign supreme. Who would have guessed that the world of high-stakes fish farming could be so thrilling?