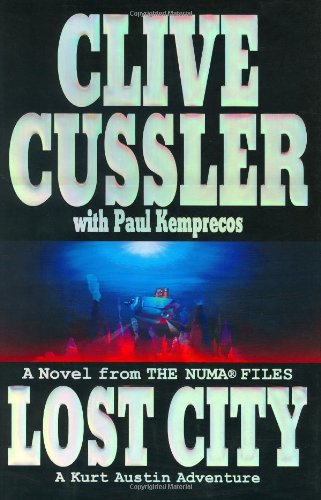 Kurt Austin, leader of the National Underwater and Marine Agency's Special Assignments Team, battles international evildoers again in the fifth installment of this excellent series. There are several parallel plots: a mysterious aviator has been found frozen in a massive glacier; a mutant seaweed is threatening to choke the world's oceans; a giant submarine is roaming the thermal vents of the deep sea area known as the Lost City; and the secretive, arms-dealing Fauchard family, run by ruthless black-widow Racine and her homicidal son, Emil, is up to no good. Also there's a mysterious 16th-century helmet, a search for the philosopher's stone and an island of filthy, mutant cannibals. Austin's love interest is lush, sensual Skye Labelle, an archeologist specializing in arms and armor ("She had a good body, but it would never make the cover of "). Kidnappings, hair's-breadth escapes, fierce battles, strange science, beautiful women and plenty of action add up to vintage Cussler. Of course, one of the secrets of the genre is to waste no time on ancillary details: "Before long, a cigar-shaped object came into view"; "Before long, they were stepping out of the cockpit onto the deck." Readers will find that, before long, they're racing through the pages as Austin and his band of merry men fight to stop the Fauchards from reaching the ultimate evildoer's goal: world domination. .