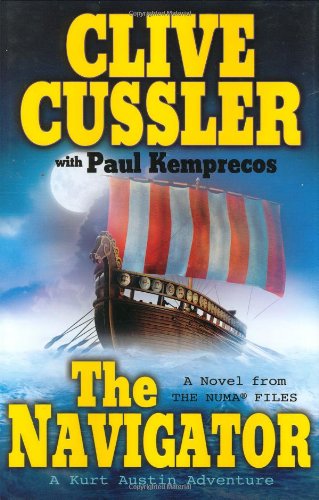 The Navigator: A Novel from the NUMA Files

Fans of action-hero Kurt Austin of the National Underwater and Maritime Agency expect imaginative plotting, but it never comes down the chute in this seventh NUMA Files novel from bestseller Cussler and Shamus-winner Kemprecos (after ). Austin and his team are hunting icebergs when they chance upon a pirate raid aimed at stealing a priceless Phoenician antiquity launched by a stereotypical megalomaniacal villain, Viktor Baltazar, who believes he's a descendant of King Solomon. Baltazar and Austin joust continually (once, literally!) over the antique, which may be connected to the lost ark of the covenant, Thomas Jefferson and the suspicious death of Meriwether Lewis. Sequences including the attempted human sacrifice of the requisite gorgeous female U.N. investigator are all too predictable, and the writing ("The Filipino's lips curved like slices of liverwurst in a frying pan") is often less than Cussler's best.