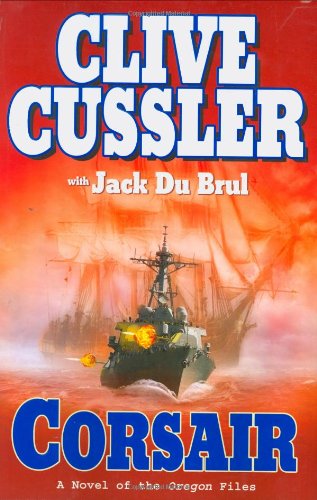 Subduing a band of Somali pirates is just the warmup for Juan Cabrillo and the valiant crew of the supership in the rousing sixth Oregon Files thriller from bestseller Cussler and Du Brul (after ). Cabrillo’s main mission is to locate U.S. Secretary of State Fiona Katamora, who’s been kidnapped en route to important international peace talks in Libya. Katamora’s abductor, the terrorist Al-Jama, wishes to disrupt the talks. “It is only through conflict that we are truly the beings that Allah intended,” Al-Jama asserts. A major subplot involves the search for an ancient corsair, a sailing ship that contains writings that could bring peace to the Mideast. The hunt for a pendant known as the Jewel of Jerusalem and a mystery surrounding Al-Jama’s actual identity also figure in, but these are minor diversions. As ever, the principal draw for the series’ faithful readers is the clever, indefatigable Cabrillo along with his merry band of tough, tech-savvy, fighting men and women.