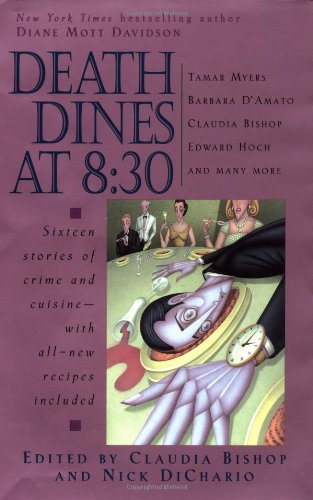 Editors Bishop and DiChario serve a delicious menu of murder and mayhem in this inspired anthology of 16 short mysteries, each with its own recipe. Written by a mix of mostly major mystery authors, both masters of the culinary cozy and those venturing into this subgenre for the first time, these varied tales, each featuring a death occurring during dinner at 8:30 p.m., are sure to please even the most discriminating palate. The one reprint, Diane Mott Davidson's Anthony Award–winning "Cold Turkey," has caterer Goldy Bear dealing with the consequences of finding a dead body in her walk-in refrigerator, while in Sharan Newman's "Death Before Compline" a similar if more grotesque discovery in a wine cask preoccupies medieval sleuth Catherine LeVendeur. Known for her suburban mysteries, Valerie Wolzien, in "Just One Bite Won't Kill You," presents an ingenious tale of a husband, wife and mother-in-law triangle. In "The Theft of the Sandwich Board," master short-story writer Edward D. Hoch takes the notorious Nick Velvet to a homeless campsite under New York City's Henry Hudson Parkway, where beef stew becomes a lethal weapon. The volume also includes a superb story by relative newcomer Nick Danger, "8-3-oh," which one can only hope is just an appetizer for more work from this promising writer. Intriguing mysteries and tempting recipes make for a delectable feast.