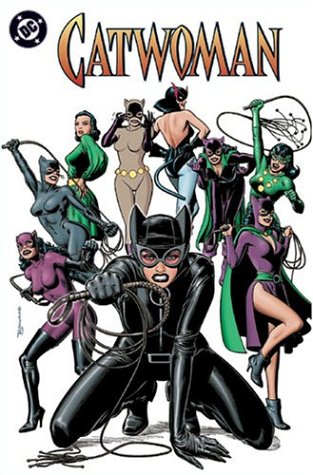 Just in time for the release of the movie comes this sharp gathering of nine Catwoman comics from the past 64 years. They provide not only an unintentionally hilarious synopsis of seven decades of fashion history but also some very entertaining comics. From her first appearance in the 1940s as a burglar to the high camp of the 1950s and '60s to the varied characterizations of the last 20 years, Catwoman has always added a touch of glamour to the gritty proceedings in Gotham City. In this collection, Catwoman is sometimes a hero, mostly a villain; sometimes Batman's nemesis, other times his lover. But all along, she's the subject of very affectionate comics, such as the woman-scorned tales of the '60s, or the 1986 story "A Town on the Night," which is entirely devoted to a Bat and Cat date. There's also "Object Relations" (1998), about a complicated love affair with a diamond. Recently, Catwoman has become more stylish and cartoony, as she carries her owns stories sans Batman. The art throughout most of the collection is top notch, encapsulating the many shifts in graphic styles since the 1940s, and includes standout work by Bruce Timm and Michael Avon Oeming. Superhero fans and newcomers will enjoy this entertaining collection equally.