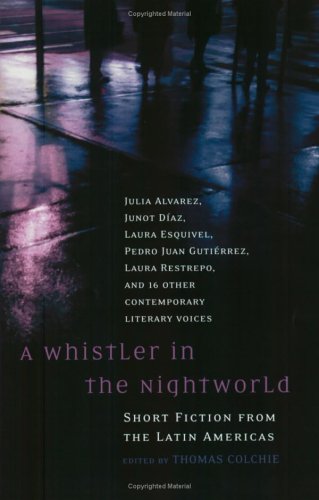 A WHISTLER IN THE NIGHTWORLD: Short Fiction from the Latin Americas

Ionesco. Dahl. Kafka. King. Curious influences, perhaps, for a group of contemporary Latin American writers. Or are they? This collection of 21 short stories written over the last 20 years proves that Latin American writers are not restricted to churning out variations on magical realist themes, as Colchie points out in his sharp and insightful introduction. The range of stories gathered here is striking, from the supernatural suspense of Javier Valdés's "People Like Us" to the Egyptian kitsch of Carmen Posada's "The Nubian Lover." Some of the stories address universal yearnings, like "The Scent of Invisible Roses," Laura Restrepo's poignant tale of a middle-aged man's reunion with his first love; others (especially those by writers living in the U.S.) are more rooted in particular cultural experiences, like "Edison, New Jersey," Junot Díaz's story about a pool table delivery boy who falls for an enigmatic Dominican maid, and "Eight Morenos," Edgardo Vega Yunqué's painful study of a Puerto Rican man who resents his resemblance to black Americans. Most of the stories appear in translation, but several (like Díaz's and Vega Yunqué's) were written in English, and others are translated by the authors themselves. Latin American literature has never fit a narrow magical realist mold—it has had to make room for Mario Vargas Llosa, Julio Cortázar and Manuel Puig as well as Gabriel García Márquez—but here it reveals itself to be ever more cosmopolitan in scope and influence. The accomplishments of this younger generation may not yet match the remarkable output of the so-called "boom" generation, but this collection is a great showcase for their work.

A Hammock Beneath the Mangoes