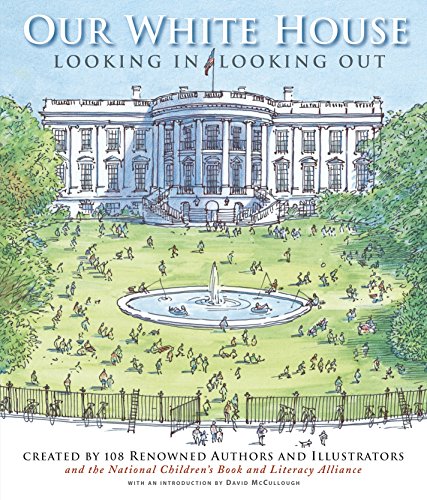 Our White House: Looking in, Looking Out

Eight years in the making, this anthology of White House history convenes an all-star roster of 108 children's authors and illustrators, as well as a few scholars and former White House employees and residents—and it is a blue-ribbon choice for family sharing during an election year. Chronologically ordered, the entries range from poems to presidential speeches, satirical cartoons to stately portraits; despite the talents of the literary contributors (Kate DiCamillo offers a poem about Lincoln's death, Patricia MacLachlan describes Eleanor Roosevelt's rescue of a cat belonging to a young girl), perhaps the most striking writings are those that most closely adhere to the historical record. Barbara Kerley details Thomas Jefferson's passion for paleontology, and M.T. Anderson describes White House ghosts (Churchill, visited by a spectral Lincoln, “tapped the ash off the end of his cigar and said, 'Good evening, Mr. President. You seem to have me at a disadvantage' ”). But few of the writers create the same impact as the occasional document: Robert Kennedy addresses the nation after Martin Luther King Jr. is assassinated, and Richard Nixon bids farewell to the White House staff. (That young readers will react to these documents is in no small part due to the writers' success in establishing the contexts for them.) Among the most provocative entries are works by artists who “look in” on the White House with a demonstrably personal vision: David Small shares color sketches of “backstairs at the White House,” a study in contrasts; Bob Kolar arranges the presidents as if on a board game, with clever annotations (who knew President Arthur held a yard sale while in office?); Peter Sís supplies 37 characteristically enigmatic portraits to illustrate freedom from fear. Although a few entries seem formulaic, the volume makes the invaluable point that history does not have to be remote or abstract, but a personal and ongoing engagement. Ages 10–up.