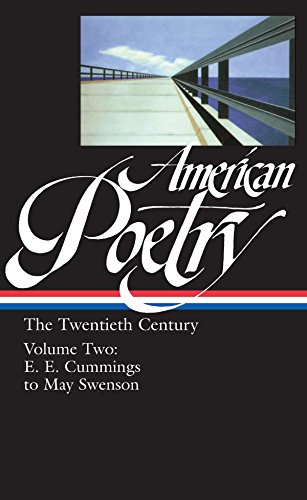 E.E. Cummings to May Swenson

These two volumes make up the first half of the largest anthology of 20th-century American poetry ever attempted. Over 200 poets are represented, all born before 1914, and presented in birth-date order. The scale here is unprecedented, and the spectrum broad, inclusive and generous. The effect is breathtaking. The first volume begins with anonymous ballads, establishing a theme of popular song that is sustained throughout both volumes, including blues, folks songs and Broadway tunes. This suggests the music that was in the air at the time much of this work was being written, as well as asserting the value of these songs as poetry in their own right. ""I can tell the wind is rising/ leaves trembling on the trees/ umm hmm hmm hmm/ all I need my little sweet woman/ and to keep my company"" (Robert Johnson, vol. 2). The emphasis in vol. 1 is on the richness of modernism, with enormous selections of Robert Frost, Gertrude Stein, Wallace Stevens, Ezra Pound, William Carlos Williams, H.D., Marianne Moore and T.S. Eliot. Several of these are long enough to comprise an entire volume of selected poems. (Mina Loy gets more than the usual page or two.) The selections are solidly edited, presenting the most representative and well-known poems across each writer's oeuvre. The second volume includes many more poets, and tends toward shorter selections, though Hart Crane is featured prominently. Multiple and simultaneous layers of American poetics are represented side-by-side in both volumes: lyricism, early confessional poetry, Imagism, light verse, Objectivism, the Harlem Renaissance, hoaxes, the Fugitives, among others. One of the greatest pleasures of these books is discovering (or re-discovering) poets like Abraham Lincoln Gillespie, Lola Ridge, John G. Neihardt or dadaist Elsa Von Freytag-Loringhoven, energetic and distinct poets who have long since been dropped from most cullings, or were never included in the first place. This anthology, edited by Robert Hass, John Hollander, Carolyn Kizer, Nathaniel Mackey and Marjorie Perloff, will be an invaluable and lasting resource to anyone interested in American poetry. Its inclusive take on the multiplicity of work leaves all the differences intact, all the layers in context. It brilliantly illuminates the shifting substance of American poetry. (Apr.) FYI: Geoffrey O'Brien is editor-in-chief of the Library of America, and the author of The Times Square Story and other nonfiction, as well as of Floating City: Selected Poems 1978-1995. His The Browser's Ecstasy: A Meditation on Reading is due from Counterpoint in June.
close
Details